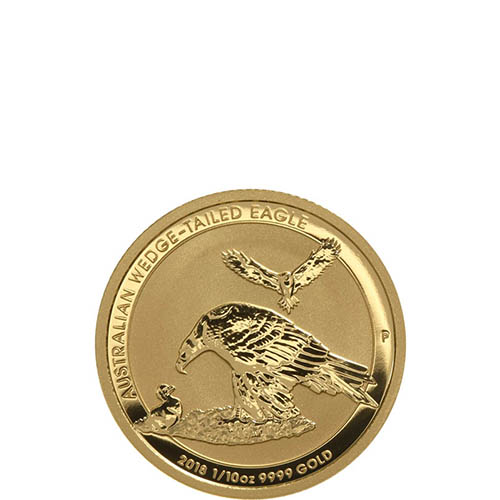 The Australian Wedge Tail Eagle Series of coins from the Perth Mint features a design from former Chief Engraver of the United States Mint, John Mercanti, on its reverse. The coins are available as silver and gold for sale, with the silver coins available in 1 oz and the gold coins offered in 1/10 oz. Right now, 2018 1/10 oz Gold Australian Wedge Tail Eagle Coins are available to purchase online at Silver.com.

Each 2018 1/10 oz Gold Australian Wedge Tail Eagle Coin is available to you in Brilliant Uncirculated condition from the Perth Mint. The coins are available inside of individual plastic capsules. The 2018 release of the Australian Wedge Tail Eagle Coin is the fifth in the series and bears the third different design in the collection, but marks only the third issue of the 1/10 oz gold option.

John Mercanti worked for the US Mint from the 1970s until his retirement in 2010. In 2014, he contracted with the Perth Mint to design the Wedge Tail Eagle on a new series of silver and gold bullion for Australia. The design for the 2014 coin was used again in 2015. In 2016, a fresh design was offered that was again repeated in 2017. The 2018 coins offer a fresh design not previously used.

On the reverse side of 2018 1/10 oz Gold Australian Wedge Tail Eagle coins is the image of a family of eagles from this species. The largest birds of prey in Australia, the wedge tail eagle takes its name from the shape of its tail feathers. In this design, Mercanti presents the eagles with a hatchling and female in the nest as a male returns in flight in the distant background field.

Mercanti has a rich history of coin design with the United States Mint, his most visible being the reverse of the Silver American Eagle bullion coin. Mercanti was promoted to the position of Chief Engraver of the United States Mint in 2006 and served as the 12th person in that post until retiring in 2010.

The obverse of 2018 Gold Australian Wedge Tail Eagle coins includes the effigy of Queen Elizabeth II. This is the fourth-generation portrait created in 1998 by Ian Rank-Broadley for the Royal Mint of England.