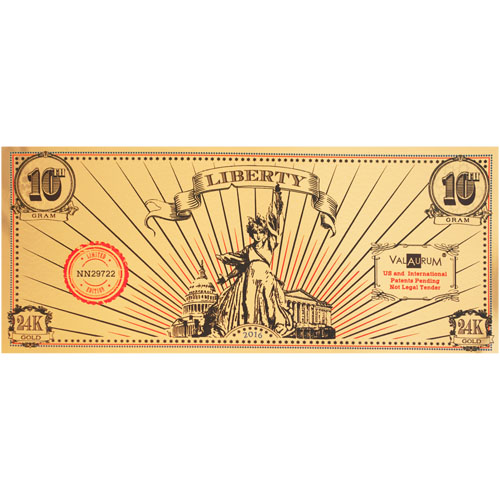 One of the most critical figures in the American psyche is Lady Liberty. This stoic Statue of Liberty has stood in the harbor of New York City for more than a century as a sign to welcome newcomers to the United States, holding up her torch as a shining light for the world to guide people to American shores. Now, her figure appears on the 1/10 Gram Gold Aurum Liberty Notes available to you for purchase online at Silver.com.

As the British expanded control over North America, in particular, the 13 colonies of British North America took over the personification as Columbia and she would become the official personification of the United States following the Revolutionary War. However, with the arrival of Liberty in the 1880s, Americans turned to Lady Liberty as an enduring symbol of the nation’s promise and hope.

On the obverse of 1/10 Gram Gold Aurum Liberty Notes is a depiction of Liberty in front-facing relief. She has a flowing robe on her figure and holds a torch up in her left hand. A banner above her head reads “Liberty,” while the US Capitol Building and US Supreme Court Building feature behind her figure.

These 1/10 Gram Gold Aurum Liberty Notes are available to you with individual currency sleeves and arrive in brand-new condition. These Aurum Gold notes are produced with a proprietary process that layers precise amounts of gold between two layers of polyester to create a secure gold note that is exceptionally thin, light, and above all, affordable.

Silver.com customer service is available to you at 888-989-7223. You can also chat with us live online or send us an email.