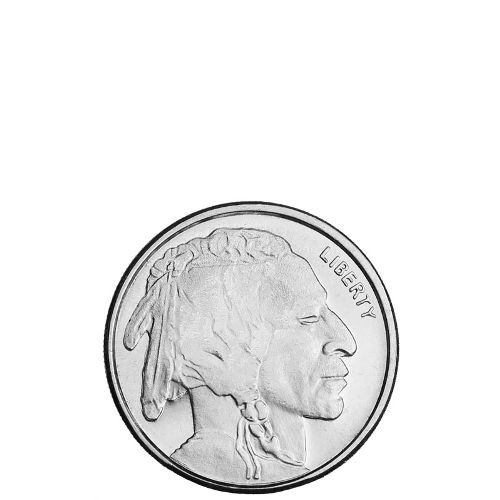 There are multiple versions of the reverse side of this coin, please be advised that you may receive any combination of designs with your order.

This 1/10th oz Silver Round showcases the popular Buffalo Nickel design on both its obverse and reverse side. Each round consists of pure .999 fine silver and weighs in at 1/10th of a troy ounce. The rounds are minted privately in the U.S.A. and will be from the mint of our choice.

There is no greater symbol of the power and majesty of the American West than the buffalo. A massive and impressive creature, buffalo roamed the wild plains of the American West for hundreds of years. Their impressive size made them both fearsome to the Native American tribes that called the West home, and provided great value to the people as a source of food and clothing. Today, the buffalo is commemorated on many commemorative rounds such as this 1/10 oz Buffalo Silver Round.

The 1/10 oz Buffalo Silver Round is a commemorative piece that carries no face value, unlike traditional currency. The silver round is a great investment vehicle for those looking to protect their hard-earned wealth against the unpredictable ebbs and flows of the modern market-based economy. The 1/10 oz Buffalo Silver Round offers an affordable option for those looking to invest in silver.

James Earl Fraser is the man responsible for the design featured on today’s 1/10 oz Buffalo Silver Round. Fraser’s design was first used in 1913 on the US government’s Buffalo Nickel coin. On one side of the coin, Fraser created a right-profile image of a Native American chieftain. That design is still regarded today as one of the greatest to be featured on an American coin. On the opposite side, Fraser featured the image of a buffalo. He created the buffalo from the image of Black Diamond, a resident of the New York Central Park Zoo in the early 20th century.

Fraser’s image of a Native American is featured on the obverse side of the round with the word “LIBERTY” engraved to the right of the chieftain’s face. On the reverse side, the depiction of Black Diamond is featured atop a mound of dirt. Below the buffalo’s image are engravings for the purity, metal content, and weight of the round.

The 1/10 oz Buffalo Silver Round is minted at various facilities throughout the United States. The reverse side of the coin often features the name of the mint engraved above the image of the buffalo. Because various mints produce this round, the name differs from one round to the next.

If you have any questions about the 1/10th oz Buffalo Silver Rounds before placing your order, please call Silver.com at 1-888-989-7223. You can get in touch with a member of our supportive staff through the website’s live chat feature or email, as well. We look forward to assisting you.