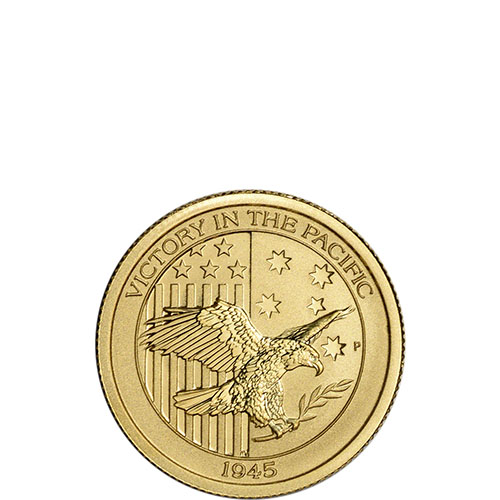 When the guns of war fall silent, nations involved in those conflicts often choose that moment to mark for future generations as a commemorative date to be celebrated. In World War II, the Pacific Theater conflict is remembered as Victory in the Pacific Day or V-J Day for Victory over Japan. Today, 1/10 oz Gold Victory in the Pacific Coins are available to you online at Silver.com.

On September 2, 1945, the US Navy battleship USS Missouri steamed into Tokyo Bay to take part in the surrender ceremony of Imperial Japan. Representatives of the defeated nation boarded the vessel and signed the official terms of surrender to end World War II in the Pacific Theater. For the people of Australia, V-J Day is celebrated with the same somber remembrance as in America, but on a different day.

Japan announced its intentions to surrender to the Allies on August 15, 1945, and with that, the guns of war fell silent on the last battlefields of World War II. The United Kingdom and Australia both recognized August 15th as V-J Day. The 1/10 oz Gold Victory in the Pacific Coin from the Perth Mint is one of a handful of coins with this design available to investors.

On the obverse of all 1/10 oz Gold Victory in the Pacific Coins is the image of Queen Elizabeth II. Her Majesty graces the obverse of all Australian and commonwealth coinage, and this particular right-profile portrait is the fourth-generation depiction of the Queen to feature since 1952. This design comes from Ian Rank-Broadley, who created the image in 1998 for the Royal Mint.

Perth Mint is the oldest operating mint in Australia. It originally opened in 1899 as a Royal Mint facility, and today operates independently of the Royal Australian Mint as a state-owned entity of the government of Western Australia.

Please feel free to reach out to Silver.com customer service with your questions. Our team is available at 888-989-7223, online through our live chat service, and via our email address. You can also find the current price of gold listed on our website at any time!