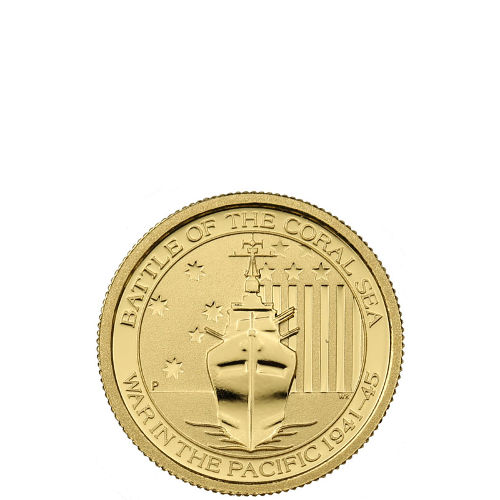 In 2013, the Perth Mint released a series of gold and silver coins honoring the commitment and sacrifices of both American and Australian armed forces during the conflict with Japan in World War II. These limited production coins are now available, with Silver.com offering the 1/10 oz Gold Australian War in the Pacific Coin for purchase.

Following the attack on Pearl Harbor, Hawaii in December 1941, the United States was pulled into World War II. The arrival of American forces in both the Atlantic and Pacific theaters provided the Allied forces with a boost and a potent attack force. The Australians and Americans bore the burden of the war effort in the Pacific.

Over the course of four years, the United States Navy and the Royal Australian Navy fought to defeat the Japanese Imperial Navy. The effort became known as island-hopping, a campaign style that saw the Americans take the Pacific back from the Japanese one island at a time.

The obverse face of the coin features the right-profile portrait of Queen Elizabeth II, as created in 1998 by Ian Rank-Broadley. This represents the fourth-generation depiction of Her Majesty to appear on commonwealth coinage since her coronation in 1952.

On the reverse is the perched eagle featured on a 240-foot-high monument that stands in Canberra, the federal capital city of Australia. The monument commemorates the Australian-American alliance of the war, and the design includes the American flag on the right of the coin and the Australian flag on the left.

Australia’s Perth Mint is the oldest operating facility in the country. Opened in 1898, it was the final facility in the Royal Mint system on the continent, and served for a time as the official mint of Australia during its shift from colony to federal state. Today, it is owned by the state of Western Australia and operates independently of the Royal Australian Mint.

Please direct your questions to Silver.com at 888-989-7223, or contact our associates online using our live chat and email features. Check out our selection of Gold Australian Coins to see similar products.