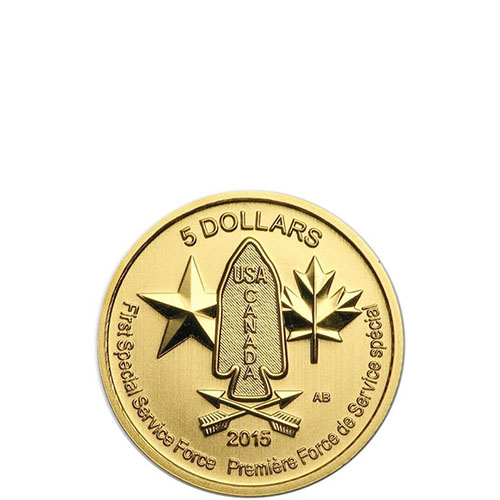 The United States and Canada may have been less-than-friendly following the establishment of an independent America, but today the two nations are close allies who have taken advantage of ideological and geographic proximity to build a better friendship. Today, 1/10 oz Gold First Special Service Force Coins are available to you online at Silver.com in BU condition.

In the wake of the attack on Pearl Harbor, the United States began to ramp up its military strength to respond to the aggressions of World War II. Americans began amassing in the Pacific Ocean to fight the Japanese and in Europe to take on the Axis forces. Among the first Americans were those who joined their Canadian brothers in the First Special Service Force.

The First Special Service Force combined American and Canadian commandos in a unit of 1,400 individuals under the command of the United States Fifth Army. These men were among America’s first responders, serving in the Aleutian Islands of Alaska, and fighting in Italy and Southern France against Nazi and Axis forces.

All 1/10 oz Gold First Special Service Force Coins in this listing are issued by the Royal Canadian Mint to commemorate the sacrifices of these men. The gold bullion coins are still available in this weight today, with coins packaged in protective plastic for individual coins or sealed sheets of 40 coins.

The reverse of the 1/10 oz Gold First Special Service Force Coin honors the men of this unit with their shoulder patch in the center of the design field. The spearhead has the words “USA” and “Canada” on it, with a US Army star to one side and the Canadian maple leaf to the other.

On the obverse of the Gold First Special Service Force Coin is the right-profile portrait of Queen Elizabeth II. Her Majesty features here in the fourth-generation design from Susanna Blunt, and has been in use since 2003.

Please feel free to reach out to Silver.com with your questions. You can reach us on the phone at 888-989-7223, on the web using our live chat, or via our email address.