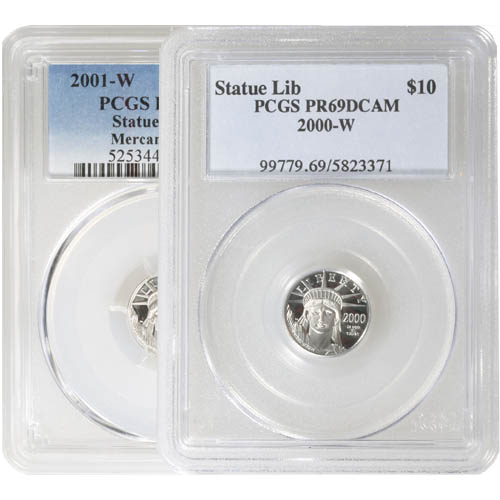 The fractional-weight Proof Platinum Eagles were only available from the United States Mint between 1997 and 2008. The design series in production during this timeframe included the 1998-2002 Vistas of Liberty and the 2006-2008 Foundations of Democracy. The 2003-2005 coins had randomly selected designs by the US Mint.

In most cases, the reverse side of 1/10 oz Proof Platinum American Eagles in this listing comes with the image of an American bald eagle on the reverse. For example, all coins in the Vistas of Liberty collection have a design of the American bald eagle as it flies over the nation. The releases in the Foundations of Democracy series featured design elements pointing to the three co-equal branches of the United States federal government, with the eagle and heraldic shield featured on the 2005 release representing the Executive Branch.

The obverse of 1/10 oz Proof Platinum American Eagles features the image of Lady Liberty. Designed by John Mercanti in 1997, this is known as Liberty gazing into the future and is inspired by the face of Liberty from the Statue of Liberty.

These 1/10 oz Proof Platinum American Eagles come with a PR69 certification from the PCGS. Known as near-perfect coins, these specimens have full, original mint luster and no more than two minuscule detracting flaws. Examples of acceptable flaws include minuscule contact marks or hairlines. The DCAM label indicates the coins have strong, frosted designs and deeply-mirrored, clear background fields.

We encourage Silver.com customers to call 888-989-7223 with questions. You can also reach us online through our live chat and email address features.