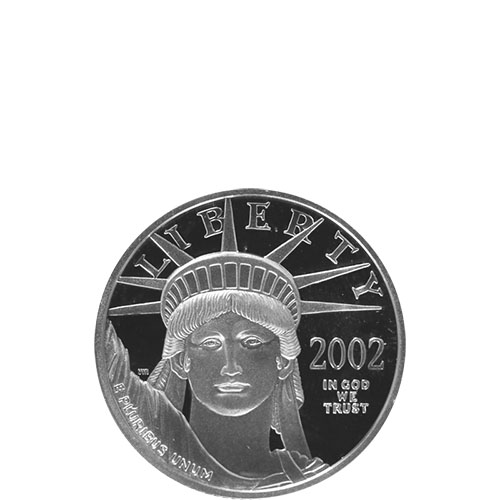 The Proof Platinum Eagles from the United States Mint were available in four weights from 1997 to 2008. The smallest of the coins available during this period was the 1/10 oz platinum coin. Today, 1/10 oz Proof Platinum American Eagles are available to you online at Silver.com.

The United States Mint offered the Platinum Eagles in Brilliant Uncirculated and Proof versions from 1997 to 2008. In both cases, the coins were issued with 1 oz, 1/2 oz, 1/4 oz, and 1/10 oz platinum options. In 2009, the BU series was suspended in its entirety, with only the 1 oz BU coin returning and not until 2016 on an annual basis. The Proof series saw its fractional-ounce coins halted in 2009 as well.

All of the 1/10 oz Proof Platinum American Eagles in this product listing are available with plastic capsules. The coins available to you here come with random years and designs. We cannot guarantee a date mark or design in advance. The coins are chosen after your payment has cleared and will be selected based on what is available in stock at that moment. Please note that you may receive coins with the same designs and dates if you buy more than one.

The reverse side of 1/10 oz Proof Platinum American Eagles comes with a variety of possible designs. In 1997, all versions of the coin had the same design of the American bald eagle soaring over the sun. From 1998 to 2002, the mint featured the Vistas of Liberty images with eagles flying over different regions of the country. From 2006 to 2008, different symbols of the branches of government in the US featured.