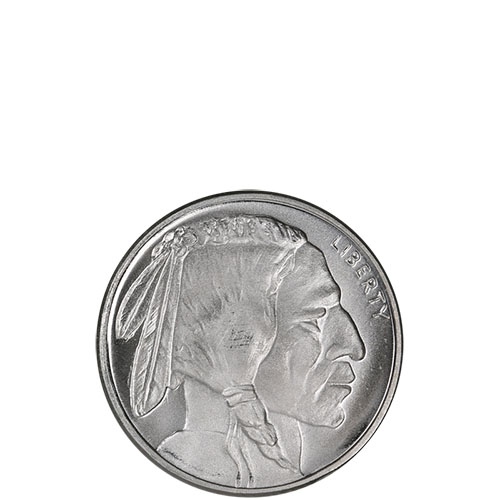 The Golden State Mint issues some of the most iconic American coin designs on the surface of silver rounds. One of those many designs is the Buffalo Nickel, the nation’s five-cent piece in circulation from 1913 until 1938. The 1/10 oz GSM Silver Buffalo Round is available to you right now for purchase online at Silver.com.

James Earle Fraser was a famed sculptor in 20th century America. Born in Winona, Minnesota in 1876, his works are visible throughout the nation’s capital of Washington DC to this day. Among his many designs are the Contemplation of Justice and Authority of Law statues at the US Supreme Court Building, Alexander Hamilton’s statue at the United States Treasury building, and the William Howard Taft monument at Arlington National Cemetery in nearby Arlington, Virginia.

His most visible design though is likely the artwork found on the Buffalo Nickel coin. Fraser was commissioned by the administration of President William Howard Taft to lead the redesign of the nickel, the first coin after the cent and Gold Eagles to receive a remake in the early 20th century.

On the obverse of the 1/10 oz GSM Silver Buffalo Round, you’ll find Fraser’s design for the obverse of the Buffalo Nickel. It captures the right-profile portrait of a Native American tribal member and includes the engraving of the word “Liberty.”

The reverse of the GSM Silver Buffalo Round includes the image of Black Diamond. This American bison was a resident of the Central Park Zoo and Fraser captured the beast in left-profile relief standing atop a small mound of dirt. The engravings on this face feature “Golden State Mint” and “1/10 Troy oz .999 Silver.”

Golden State Mint Silver Buffalo Rounds are available to you inside of protective flips for individual silver rounds or tubes of 50 rounds for multiples. This design is constantly in production at Golden State Mint and is also available in ¼ and ½ oz silver, as well as 5 oz copper.

The Golden State Mint is a private minting operation that opened in 1974. The private US mint strikes silver, gold, and copper rounds, many of which feature inspiring designs taken right from circulation US coinage of the past.