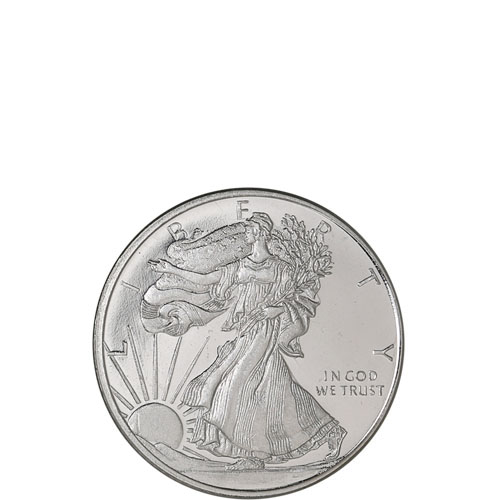 Weinman’s depiction of Lady Liberty known as Walking Liberty is believed to have been inspired by various images from both foreign coinage and even some of Weinman’s own prior works. Some believe there is a resemblance to the so-called “sower” woman found on French coins created by Oscar Roty. Others see in the head design of Walking Liberty inspiration drawn from Victory as depicted by Weinman in the 1909 Union Soldiers and Sailors’ Monument.

The depiction of the bald eagle that Weinman used on the reverse of the Walking Liberty Half Dollar coin features the national symbol as it sits on a mountain crag. The bird rests on its talons and has its wings unfolded at its back. The symbolism is meant to convey a sense of fearlessness in spirit and consciousness of its own power.

On the obverse of the 1/10 oz GSM Silver Walking Liberty Rounds, you’ll find the image of Walking Liberty. Created by Weinman in 1916, this figure appeared on the half dollar from 1916 to 1947. This image of Liberty wears the American flag on her shoulders and carries branches of oak and laurel in her left hands.

The reverse of the GSM Silver Walking Liberty Rounds bears the aforementioned bald eagle. The original design was judged by some as inaccurate due to the inclusion of a mountain pine sapling. Some believed it was emblematic of America, but it has never been used as a symbol of the country. Whatever the case, Weinman’s original design is found on this side of the rounds.

The Golden State Mint is a private minting facility founded in 1974. Launched by Jam Pavlakos, his son Andrew eventually joined the company to help guide its vision forward into the future. GSM creates beautiful designs on silver, gold, and copper rounds for investors and collectors.

We encourage Silver.com customers to contact us when buying silver. You can call us at 888-989-7223, chat with us live online, or simply send us an email with your inquiries.