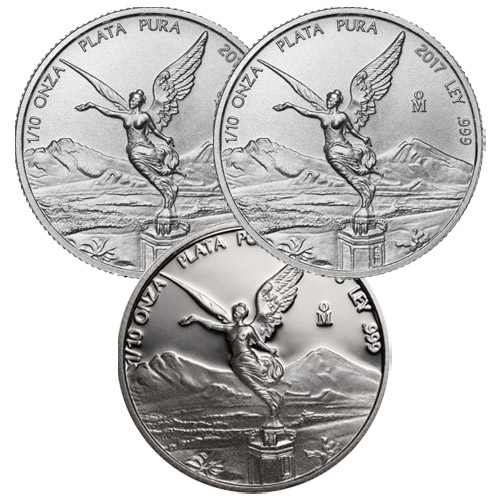 The silver coins for sale from the Mexican Mint are anchored by the Silver Libertad collection. Silver Mexican Libertads are available annually as of 2008 with eight options, with various debut years for the many weights in the collection. The 1 oz coin was first in 1982, with fractional-ounce coins released in 1991 and follow-up weights in 1996 and 2008. Now, 1/10 oz Silver Mexican Libertads are available to you for purchase online at Silver.com from random years of issue.

The 1/10 oz Silver Mexican Libertad has varying mintage figures based on the year of issue. The highest mintage in the series came in 1992 when 299,933 coins were sold, while the lowest mintage in the collection came in 2012 with a total of 3,300 coins sold.

The obverse design elements of the 1/10 oz Silver Libertad feature the depiction of Winged Victory. Known as the Angel of Independence, her effigy has adopted during the war of independence as a symbol of Mexican perseverance and eventual victory. The design on this face of the coin captures Winged Victory in front-facing relief as first featured on the 1921 gold Centenario for dates of 1991 to 1995. In 1996, a new, modern version of Winged Victory was adopted for the coins.

On the reverse field of 1/10 oz Silver Mexican Libertads is an image of the Mexican coat of arms. This face of the coin has the modern depiction of the national seal. It shows a Mexican golden eagle battling a serpent on a cactus branch with inscriptions of the nation of issue and a wreath included in the design.

These 1/10 oz Silver Libertads are available in varied conditions from random years. All coins are packaged in protective plastic flips and chosen at random after your payment has cleared. We cannot guarantee a particular date or condition in advance. If you buy several coins, please note you could get matching specimens.

Silver.com customer service is available to assist you at 888-989-7223. We are also available on the web through our live chat and email address features.