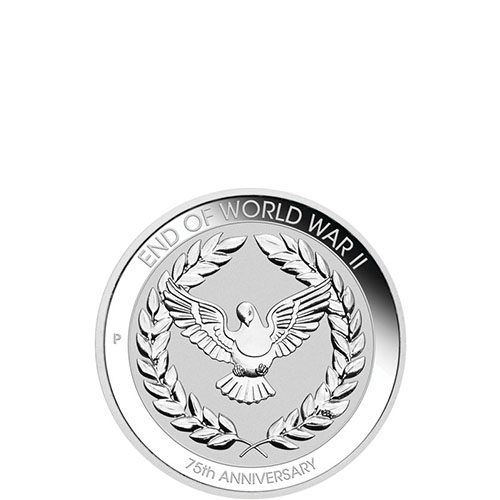 In summer 1945, the guns stopped firing, tanks stopped rolling, and planes stopped dropping bombs as World War II came to a close in both Europe and the Pacific. The United States emerged victorious as the only nation to successfully fight a two-front war, but it was done as part of a great alliance that included England, France, and the Soviet Union in Europe, and Australia in the Pacific. Right now, 2020 1/10 oz Silver US Australian World War II 75th Anniversary Coins are available to purchase online at Silver.com.

Each of the 2020 1/10 oz Silver US Australian World War II 75th Anniversary Coins in this product listing comes with a protective capsule to house the coin that is enclosed in an assay card. The assay card is a black card with a solemn recreation of the reverse design from the coin that honors the hard-earned peace of World War II.

Victory in Europe Day was achieved on May 8, 1945, when Nazi Germany surrendered to the Allies. Hitler had taken his own life in a bunker in Berlin as the Soviet Army assailed the city from the east and American and British forces moved in from the west. In the Pacific Theater, Victory in the Pacific Day, or Victory over Japan Day, was achieved on August 15, 1945, after the United States dropped atomic bombs on the cities of Hiroshima and Nagasaki to force Japan to consider surrender over a costly invasion of the home islands by the Allies.

The obverse face of 2020 1/10 oz Silver US Australian World War II 75th Anniversary Coins includes the portrait of Queen Elizabeth II. Her Majesty is shown here in right-profile relief with the George IV State Diadem Crown on her head. This is the sixth-generation bust of the Queen on Australian coins and the first design to include the Queen’s shoulders in the image since 1966.

On the reverse side of 2020 1/10 oz Silver US Australian World War II 75tht Anniversary Coins is a depiction of a single dove. The dove flies into the scene with its wings spread out and is encircled by a wreath made of olive branches.

Please feel free to reach out to Silver.com with any questions when buying silver. Our customer service team is available at 888-989-7223, online through our live chat, and via our email address.