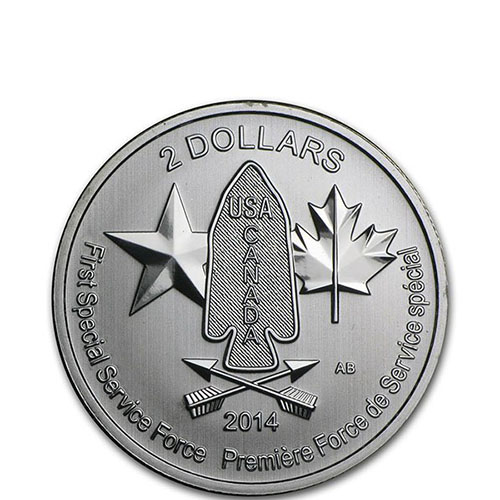 Each of the ½ oz Silver First Special Service Force coins listed here today arrives from the Royal Canadian Mint in BU condition. These uncirculated coins are available inside of individual plastic for protection, or in bulk packages. The bulk options include tubes of 20 coins or boxes of 240 coins.

The First Special Service Force of Canadian and American commandos is at the heart of the development of permanent, standing Special Forces in both the American and Canadian militaries. Many of these countries best modern units view the Devil’s Brigade as their “Founding Fathers.”

On the obverse of all ½ oz Silver First Special Service Force Coins you’ll find the portrait of Queen Elizabeth II. Her Majesty features on all Canadian coinage, and in this design is the fourth-generation right-profile portrait completed in 2003 by Susanna Blunt. It is the first design of a Monarch on Canadian coins since George VI to depict a monarch without a crown.

The reverse of the ½ oz Silver First Special Service Force coin includes the patch worn by members of the Devil’s Brigade. It includes a spearhead in the center with the name of both nations, and designs on either side that vary by year. The original design included a star for the US and a maple leaf for Canada. Latter designs included an American bald eagle and a more intricate maple leaf.

If you have any questions, please don’t hesitate to ask. Silver.com customer service is available at 888-989-7223, online through our live web chat feature, or via our email address.