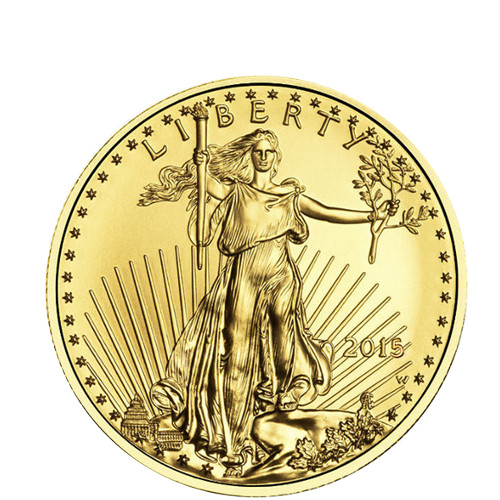 This listing is for 1/2 oz Gold American Eagle Coins in varied condition. The exact coins you receive will be from years of our choice, however each will contain 1/2 troy ounce of pure gold. Struck by the US Mint, these coins feature the American Eagle design and have a $25 USD denomination.

The Gold American Eagle coin was first authorized under the Gold Bullion Act of 1985. Much like the Silver Bullion Act of the same year, this deal authorized the release of gold from the treasury for production as circulation currency in the United States. Under the official act, the coin was minted in 1/10, 1/4, 1/2 and 1 oz weights and today is still only minted in these sizes.

All Gold American Eagle coins are guaranteed to contain 22 karat gold and the actual weight in troy ounces is backed by the full faith of the US government. Under the terms of the act, all the gold used in the production of these coins must come from sources in the United States. Each Gold American Eagle also has small amounts of silver and copper included in the minting process to create a more wear-resistant coin that can withstand use in currency.

The 1/2 oz Gold American Eagle features Augustus Saint-Gaudens’ image of Lady Liberty on the obverse side of the coin. Lady Liberty can be seen walking toward the viewer with a torch for guidance in her right hand and an olive branch in her left. The setting sun is featured behind Lady Liberty. Engravings surrounding her image include 50 stars, one for each US state, the word “LIBERTY,” and the year of minting.

On the reverse side of the coin, the image of an eagle landing in its nest is featured. The phrases “E Pluribus Unum” and “In God We Trust” are engraved on either side of the image. Above the eagle’s head is the phrase “United States of America,” while the weight, metal content, purity, and face value of the coin are engraved below.