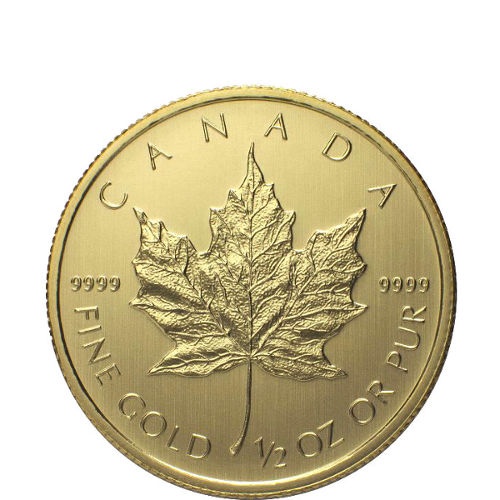 However, 1986 to 1989 coins feature a right-profile portrait of Queen Elizabeth II at the age of 39. Starting in 1990, a new design of Her Majesty was rolled out that included a portrait of the Queen at the age of 64. Since 2004, the obverse of the coins have featured the Queen of England at the age of 79, and was created by Susanna Blunt.

On the obverse of the 1/2 oz Gold Canadian Maple Leaf Coin is the image of Queen Elizabeth II. Engravings on this face surrounding Her Majesty include the words “Elizabeth II” above her image and “20 Dollars” below, along with the year of issue for the coin.

The reverse side of all Gold Canadian Maple Leaf coins focuses on the sugar maple leaf. The leaf design itself has not changed over time, but in 2013 the Royal Canadian Mint introduced a micro-laser engraved textured maple leaf to combat counterfeiting, and increased security with radial lines in 2015.

All 1/2 oz Gold Canadian Maple Leaf coins listed here are available from varied years of issue. With coins available from 1986 to 2016, the only determining factor in the date mark you receive is availability at the time of purchase.

If you have any questions for a Silver.com associate, you can contact us at 888-989-7223. You can also connect with us online using our live web chat and email. See our full selection of Canadian Gold Coins.