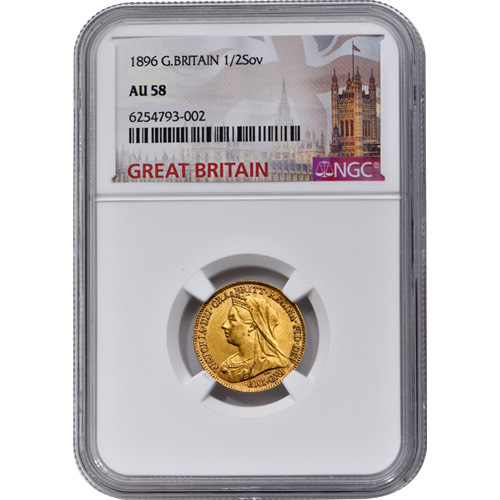 Issued for circulation for more than a century by the Royal Mint, the Gold 1/2 Sovereigns from Great Britain were recognized around the world as a stable form of currency used throughout Britain’s sprawling empire in the 19th and 20th centuries. Introduced in 1817, the coins were only halted in circulation production in the 1930s. Today, NGC-graded Gold Great Britain 1/2 Sovereigns are available to you online at Silver.com.

All of the Gold Great Britain 1/2 Sovereigns in this product listing are packaged in protective slabs by the NGC with an About Uncirculated 50+ grade. Coins in this condition have medium to full mint luster with extremely light or even simple trace signs of wear and tear on only the highest relief points of the design strike.

Silver.com offers these coins to you from random years in this listing. These coins come with random date marks that range from 1817 when the series launched until the 1930s when the 1/2 sovereign was issued for the final time in circulation. Since 1980, with the exception of 1981, the Royal Mint has issued 1/2 sovereigns as a gold bullion specimen.

The reverse side of Gold 1/2 Sovereigns features two possible designs, though one is far more prominent than the other. When the series launched in 1817, the Royal Mint used an image of St. George slaying a dragon from horseback as created by Benedetto Pistrucci. Through the first several decades of Queen Victoria’s reign, the coins had the Royal Arms of England instead.

Please contact Silver.com if you have any questions. Our team can assist you on the phone at 888-989-7223, online using our live chat, and via our email address.