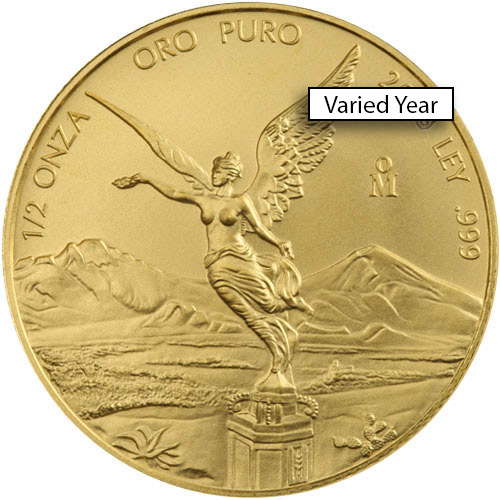 In 1921, the Mexican Mint introduced the gold Centenario circulation coin to celebrate the nation’s 100th anniversary of freedom from Spanish rule. Today, the designs of the Centenario live on with the official silver and gold coins of the nation of Mexico. The ½ oz Gold Mexican Libertad Coin is one of those products and is available to you online today for purchase at Silver.com.

The Centenario coin from the Mexican Mint was issued from 1921 to 1931 during its initial run, returning to production in 1943 and lasting until 1972. The original coins were a circulation 50 peso gold piece, while the 1943-1972 coins were largely commemorative. From 1947 until the conclusion of the Centenario, the coins all had a “1947” year of issue.

Now, the Mexican Mint uses the designs from this famous coin as the face of its major bullion coin series. The Libertad is available in both silver and gold bullion, with the Gold Libertad first issued in 1981 with 1 oz and ¼ oz weights to accompany these ½ oz specimens. Production of the coins has varied over time, with the highest mintage of ½ oz coins coming in 1981 at 193,000. The lowest mintages came in 2003 and 2008 with just 300 coins struck, and 2017’s total was 700 coins.

On the obverse of all Gold Mexican Libertad coins you’ll find the image of Winged Victory in the center as the focal point of the design. Based upon the Roman religion’s goddess of victory, Victoria stands atop the Mexican Independence Victory Column in Mexico City, a structure erected during centennial celebrations in 1921.

The reverse of the ½ oz Gold Mexican Libertad coin features the coat of arms of Mexico. This modern version includes a bald eagle atop a cactus branch, with its talons and beak used to battle a serpent trying to encircle it. The phrase “Estados Unidos Mexicanos” is engraved above this design with a wreath frame below.

All ½ oz Gold Mexican Libertad Coins in this listing are available to you with a random, varied year of issue. The ½ oz Gold Libertad is available from year ranges that include 1981, 1991-1994, 2000, and 2002-present. Silver.com does not guarantee or reserve a specific year of issue. You will receive a coin and year of issue based upon availability in our warehouse when your order is prepared for shipment.