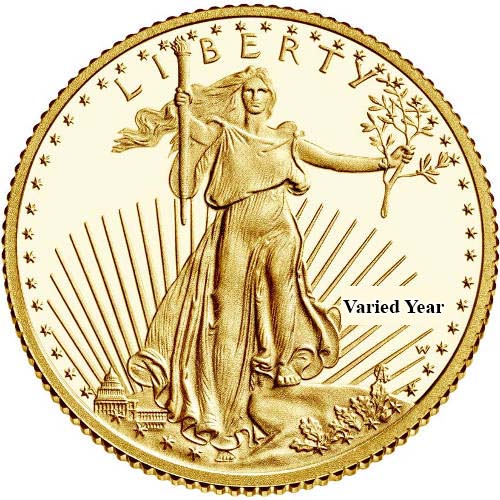 The official gold bullion coin of the United States is the Gold American Eagle. Featuring some of the most iconic symbols of America, this coin is offered annually by the United States Mint in a total of four weights and three different versions: bullion, proof, and burnished. The ½ oz Proof Gold American Eagle Coin is now available from various years of issue online at Silver.com.

When the United States Mint released the Gold American Eagle for the first time, it marked the return of a coin design not seen on US coinage since 1933. Augustus Saint-Gaudens designed the Lady Liberty image in 1907 at the behest of President Theodore Roosevelt, who had initiated a bold plan to redesign all American coinage with a modern, distinctly American appeal.

Saint-Gaudens’ design featured Liberty walking forward from the nation’s capital of Washington DC with her torch held high in her right hand and the olive branch of peace in her left. Her depiction was originally surrounded by 46 stars, but changed in 1912 to feature 48 stars after the admission of New Mexico and Arizona into the Union.

On the obverse side of each ½ oz Proof Gold American Eagle is Augustus Saint-Gaudens’ image of Lady Liberty. His depiction features a full-length figure of Liberty as she strides forward over the nation’s capital city of Washington D.C. The torch held aloft in her right hand serves as a guiding light for the nation.

The reverse side bears the image of a male bald eagle flying over the family nest. In the nest, a female bald eagle guards a group of hatchlings. This image was created in 1986 by Miley Busiek, and is used specifically on the Gold American Eagle program.

Through this product listing, you’ll receive a ½ oz Proof Gold American Eagle in its original US Mint box with a Certificate of Authenticity. ½ oz Gold Eagles were originally produced by the Philadelphia Mint from 1987 until 1993 featuring the “P” mint mark. Starting in 1994 and continuing today, the ½ oz Gold Eagle is produced at the West Point Mint with a “W” mint mark.

We encourage you to ask questions of our Silver.com customer service team regarding this coin. Please contact us at 888-989-7223, or reach out to us online through our live chat and email features.