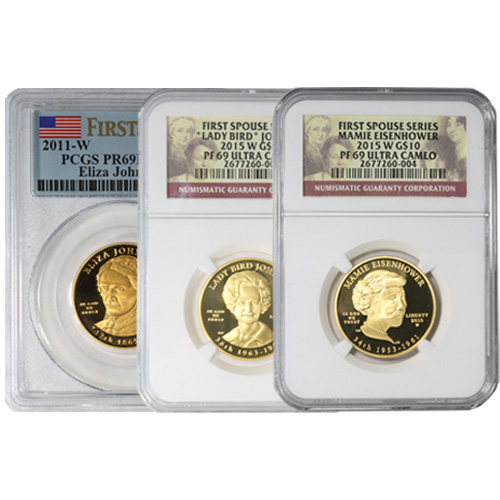 Any quantity available for $44.99 per coin over spot!

The United States Mint introduced the First Spouse coin program in 2007 to honor the women who have served as First Spouse alongside the President of the United States of America throughout the nation’s history. The series features four designs per date mark, with a few exceptions. Today, 1/2 oz Gold US Mint First Spouse Coins are available to you online at Silver.com in near-perfect condition.

The First Spouse Program launched in 2007 with Martha Washington, the First Spouse of the first President of the United States of America. Each release year typically has four designs, with a few exceptions. The 2009 series had two releases for President John Tyler. One issue represented his first wife died while he was in office and another for his second wife whom he married late in his term. The 2013 series had a similar five-coin release to represent the two wives of President Woodrow Wilson: Ellen Wilson and Edith Wilson. The 2016 release had only three releases as only Richard Nixon (Pat Nixon), Gerald Ford (Betty Ford), and Ronald Reagan (Nancy Reagan) qualified for the Presidential $1 Coin program, thereby qualifying the First Spouse for this series.

All 1/2 oz Gold US Mint First Spouse Coins in this listing are near-perfect specimens. Coins with a Mint State 69 or Proof 69 certification have full, original mint luster and no more than two minor detracting flaws. Examples of acceptable flaws include only minuscule contact marks or hairlines outside of the primary focal points of the coin.

Silver.com chooses your coins at our discretion once your payment has been processed. First Spouse coins are issued in BU and proof versions, so you may receive one or the other. The grading house label, NGC or PCGS, cannot be guaranteed. Also, we cannot guarantee the date mark and design for your coins. If you purchase multiples, please remember you could receive coins of the same type, design, and grading house.

Please feel free to reach out to Silver.com with any questions about buying gold. Our team is available at 888-989-7223, online using our live chat, and via our email address.