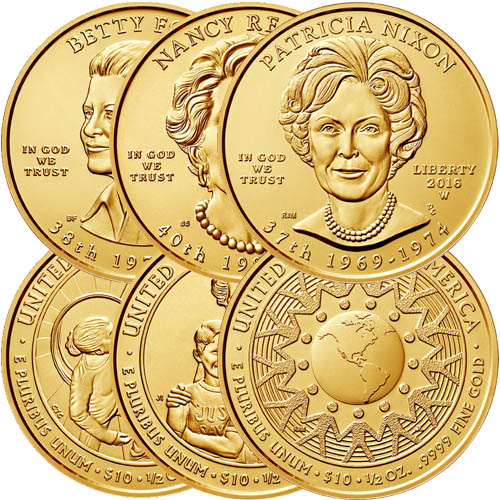 The US Mint First Spouse program is designed to partner with the $1 Presidential Coins. First Spouse designs are issued in the same order as the coins representing the men who have served as President of the United States of America. As such, the series began with the wife of President George Washington. Martha Washington was the debut release in this series in 2007.

The program has so far released coins in 2007 through 2016. While four coins are typically released each year, there have been two exceptions. The 2009 issue had five design releases to account for the two wives of President John Tyler, the 10th US President. His first wife, Letitia, died early in his presidency and remarried late in his term to Julia.

In the 2016 release, the final First Spouses represented were Pat Nixon, Betty Ford, and Nancy Reagan. The spouses of Presidents George H.W. Bush, Bill Clinton, George W. Bush, and Barack Obama have not featured in the series yet because those presidents have not qualified yet for the $1 Presidential Series.

On the obverse of each 1/2 oz Gold US Mint First Spouse Coin is the portrait of a First Spouse. The reverse side includes a design honoring the achievements of that same First Spouse while serving alongside their partner in the White House.

These 1/2 oz Gold US Mint First Spouse Coins are available to you for purchase today from random years. Your coins are chosen at random after your payment processes. We cannot guarantee a particular date or accompanying design. If you buy more than one, you may receive several of the same design.

We encourage Silver.com customers to call us with questions about gold for sale at 888-989-7223. You can also reach out to us online through our live chat and email address.