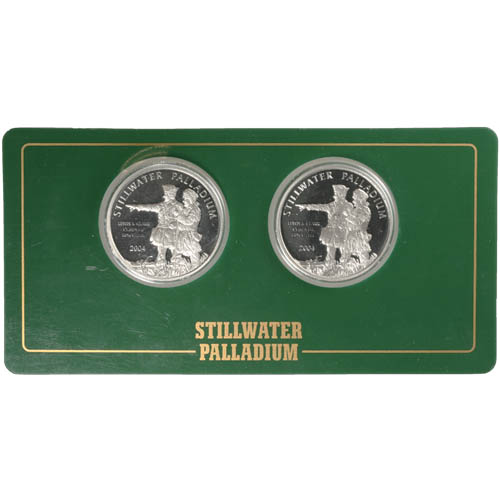 Palladium is one of the rarest metals in the earth. It is a member of the platinum precious metals group. While the price of palladium has been rising in recent years, mints around the globe have been introducing various different palladium products. The 1/2 ounce Palladium Johnson Matthey Lewis and Clark 2-Round set is currently available to you for purchase online at Silver.com.

Lewis and Clark set out on an expedition with the Corps of Discovery in May of 1804. The goal of the mission was to map the entirety of the Louisiana Territory recently purchased by US President Thomas Jefferson. Lewis and Clark’s Journey took two years and concluded in September 1806.

During their journey through the West, Lewis and Clark set out to accurately map the whole landscape of the new territories acquired by the United States. It was also an important part of their mission to discover viable routes from the US East Coast through the new territory to the Pacific coast of the continent. This two-round palladium set from Johnson Matthey was issued in 2004 to Mark the 200th anniversary of Lewis and Clark’s expedition.

On the obverse side of each round in this set, you will find the image of Lewis and Clark standing in the wild and looking out over the landscape. The design on this side is based on a painting from Frank Davenport. There is an inscription on the top of the round design field that reads “Stillwater Palladium.”

The reverse face of these 1/2 oz Johnson Matthey Lewis and Clark rounds includes the image of an American Bison. This design is the left profile bust of a buffalo created in 1913 by James Earle Fraser. It originally appeared on the reverse of the Buffalo Nickel circulation coin in the United States from 1913 until 1938.

These 1/2 oz Palladium Johnson Matthey Lewis and Clark rounds are housed inside of a sealed assay certificate. You will find a total of 1/2 oz palladium rounds in this packaging. On each of these cards, you will find a unique serial number for the product and the signature of the CEO from Stillwater Mining Company.

We encourage Silver.com customers to reach out to us with any inquiries. You can call us on the phone at 888-989-7223, connect with us online using our live chat program, or simply send an email.