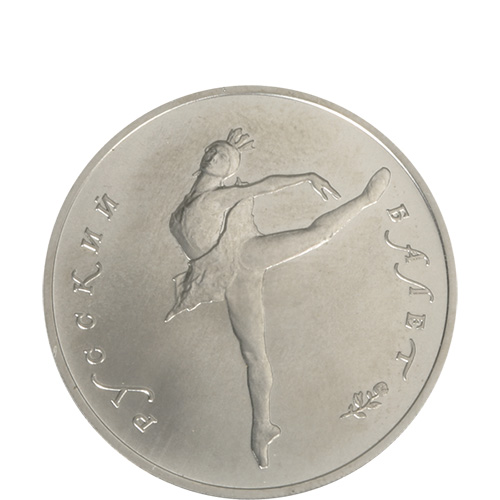 Introduced in 1989, the Palladium Russian Ballerina coins are a unique offering from the Moscow Mint that transfer across the fall of the Soviet Union and the rise of the modern Russian Federation in 1992. The coins were available in three weights and featured new designs on the obverse each year. Today, 1/2 oz Palladium Russian Ballerina Coins are available to you online at Silver.com.

The Russian Ballet is world-renowned today as a cultural icon of Russian culture and its people. The ballet was developed in Russia during the rule of Peter the Great. He believed that too much isolationist power was held in Moscow, so following the construction of the city of St. Petersburg, Western cultural concepts were allowed into the nation. This started with the adoption of ballet.

All of the 1/2 oz Palladium Russian Ballerina Coins in this listing come in Brilliant Uncirculated condition. The coins are available in protective plastic flips and offered from random years of availability. Silver.com cannot guarantee the date mark and its corresponding design for the coin you receive. For those who purchase more than one coin, please note that we are unable to hand-select varying date marks and designs.

On the reverse of 1/2 oz Palladium Ballerina Coins is the date mark and face value for the coins in rubles. Also found on this side of the coin is the hammer and sickle on an image of the globe. Even though this was no longer used on the national flag of the Russian Federation, the Moscow Mint continued its use after the fall of the Soviet Union in 1991.

Part of the reasoning for the Moscow Mint’s use of palladium in this coin series is the vast reserves of palladium found naturally in Russia. The country is home to roughly 40% of the world’s palladium deposits.

Please feel free to reach out to Silver.com with questions. You can call us on the phone at 888-989-7223, online using our live chat, and via our email address.