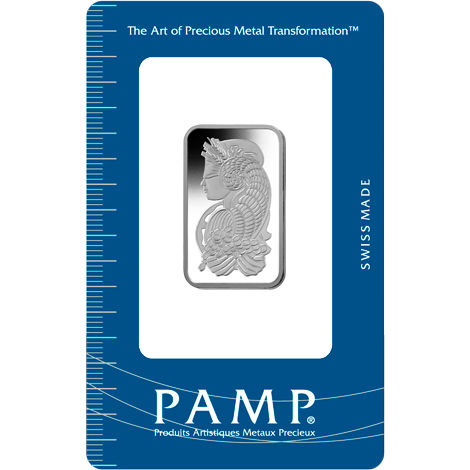 PAMP Suisse is known for creating some of the most valuable and sought-after precious metal bars in the world. At the heart of the demand for its products is the Fortuna design. A staple of its gold and silver bar designs, the Fortuna image is now available on a variety of platinum bars from the Swiss refinery. The ½ oz PAMP Suisse Platinum Fortuna Bar is now for sale on Silver.com.

Known officially as Produits Artistiques Metaux Precieux, PAMP Suisse has a rich history of producing some of the finest gold and silver bars. In recent years it has expanded production of platinum products as demand from investors and collectors has risen. Platinum’s popularity is not on par with gold, but it is one of the world’s rarest precious metals and has a value rivaling that of gold.

Fortuna was regarded as a goddess of multiple areas in Roman mythology, as well as a personification of luck in Roman religion. As deity, she was considered the goddess of fortune, but also as a goddess of fate. It is said that she is responsible for taking the lives of Augustus’ grandsons Gaius and Lucius when they were very young. Both boys were prospective heirs to the Roman Empire.

On the reverse side of the ½ oz PAMP Suisse Platinum Fortuna bar are the engravings that numismatics look for in a bar. The corporate logo is included along with the bar’s weight, purity, and metal content, as well as an assayer’s mark and the individual serial number.

PAMP Suisse is located in Ticino, Switzerland. Though it was founded as an independent company in 1977, today it is part of the global precious metals and financial services firm MKS Group. The partnership between PAMP and the Geneva-based firm was solidified in the early 21st century.

If you have any questions for a Silver.com associate, you have three ways to reach us. We’re available on the phone at 888-989-7223, online through our live web chat, or via email. If you are interested in similar products, please check out our full selection of Platinum Bars. 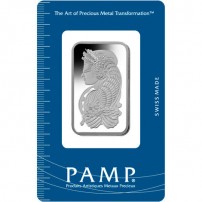