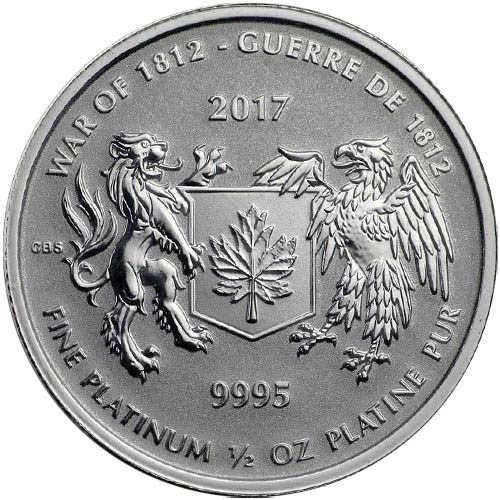 The War of 1812 was a seminal moment for the newly formed United States of America. Less than 30 years after expelling the British from a large portion of North America, the United States believed it faced another existential threat and declared war on another nation for the first time in its history. Today, 1/2 oz War of 1812 Platinum Bullion Coins are available to you online at Silver.com.

The War of 1812 marked the first time in the history of the young United States that it had declared war on another power. However, this was the second war between the United States and United Kingdom in three decades, and would eventually end in what is considered an American victory after more than two years of warfare on the North American continent.

All 1/2 oz War of 1812 Platinum Bullion Coins in this listing is available with an uncirculated condition and comes inside of individual packaging for singular coins. Purchases of multiple coins may be available inside of sheets containing 10 coins or a box with 40 sheets for a total of 400 coins in all.

On the reverse face of 1/2 oz War of 1812 Platinum Bullion Coins are the heraldic beasts of the two main combatants, plus a shield depicting the Canadian maple leaf. This is significant due to some of the historical reasons behind the war. Though the British Royal Navy’s impressment of American merchant sailors for service on British vessels was one cause cited by Americans, other historians point to a US desire to annex some or all of Canada, which was then known as British North America.

The central design element includes a shield with a singular Canadian maple leaf upon it. The shield is supported on one side by the Lion of England and on the other side by the American Bald Eagle.

Please feel free to reach out to Silver.com with your questions about these coins. You can call us at 888-989-7223, chat with us live online, or simply send us an email. Don’t forget to check platinum prices when shopping!