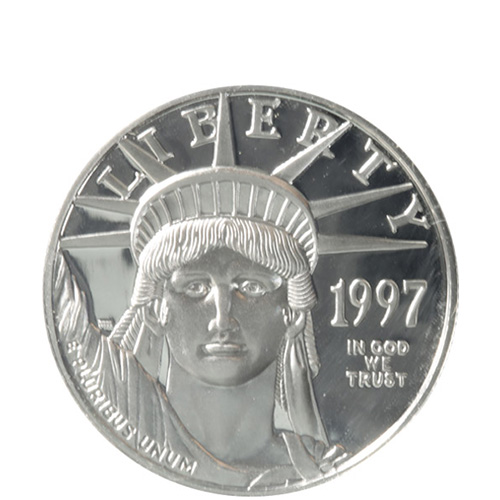 From 1997 to 2008, the Proof Platinum Eagle was offered in 1 oz platinum and three fractional-ounce options. The fractional-ounce coins were suspended starting in 2009 and have not been reissued in the series since that time. Among the three weights, the 1/2 oz coin was the largest and is followed by the 1/4 oz and 1/10 oz coins.

Production of the 1/2 oz Proof Platinum Eagles varied from one year to the next. The highest mintage in this weight came in the second to last year of availability. The 2007 coin had a mintage of 25,519 coins, some 10,000 more than the next closest year and more than double the average yearly mintage. The lowest mintage came in the final year, 2008, when just 4,020 coins were struck.

The obverse of 1/2 oz Proof Platinum American Eagles comes with an image of the Statue of Liberty. This design was created in 1997 by John Mercanti and features every year on the obverse of the BU coins, and was on the obverse of all proof coins from 1997 to 2017.

On the reverse field of 1/2 oz Proof Platinum Eagles, you will find varying depictions of the American bald eagle. From 1998 to 2002, the Vistas of Liberty series offered various images of the American bald eagle in flight above different regions of the nation. The 2006-2008 series known as the Foundations of Democracy offered symbols of the three branches of American federal government.

These 1/2 oz Proof Platinum American Eagles come with protective capsules only and are offered from random years of availability. The possible date marks, as mentioned above, range from 1997 to 2008. Silver.com selects all coins at random once your payment has been processed. As such, we cannot guarantee a design or date in advance. If you buy multiples, it is possible to receive coins with the same date and design.

Silver.com customer service is available to you at 888-989-7223. Alternatively, you can reach us online using our live chat and email address features.