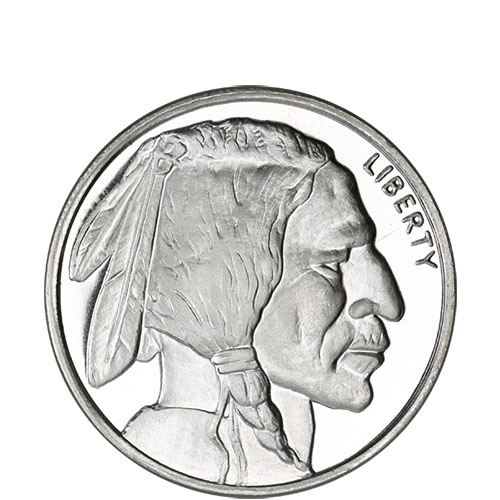 James Earle Fraser was a celebrated sculptor in the United States during the first half of the 20th century. In addition to creating many public works and monuments, Fraser also created the iconic design found on the nation’s five-cent piece from 1913 to 1938. Right now, the ½ oz GSM Silver Buffalo Round is available to purchase online at Silver.com.

Each of the ½ oz GSM Silver Buffalo Rounds available today comes in either a protective plastic flip for individual rounds or inside of tubes that contain 20 rounds each. The Golden State Mint issues the famous Buffalo Nickel design on silver rounds that range in weight from 1/10 oz of silver to 5 oz of copper.

The design for the Buffalo Nickel coin was authorized by the administration of President William Howard Taft. American coinage was undergoing a massive revitalization effort in the early 20th century spurned on in 1907 by President Theodore Roosevelt. Fraser’s design for the nickel was the second major coin revamp following the Gold Eagle coins.

On the obverse of the ½ oz GSM Silver Buffalo Round, you’ll find the right-profile portrait of a Native American. Fraser himself stated in the 1930s that the figure did not represent a singular individual, but rather was the combination of facial features from as many as three real-life Native American tribal leaders. According to Fraser, Iron Tail, Two Moons, and Big Tree were the figures he used for inspiration.

The reverse of the ½ oz Silver Buffalo Round includes the image of a buffalo. Though Fraser had a good deal of experience with Native American life and the wildlife of the American Midwest, this design was inspired by Black Diamond. The animal was a resident of the Central Park Zoo in New York City during the early 20th century.

Golden State Mint produces silver, gold, and copper rounds in various weights with numerous designs available. The Buffalo Round is among its most popular and is coined on a near-daily basis to meet the demand for this iconic design.