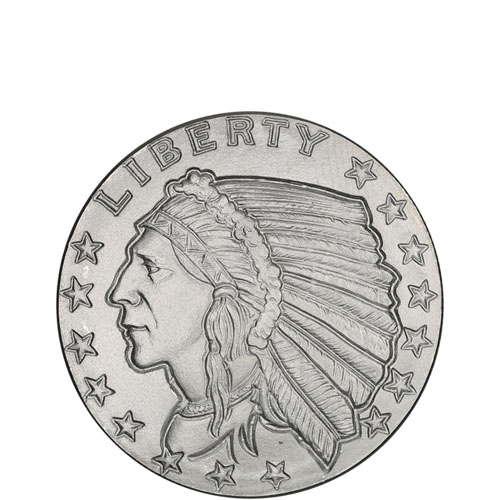 The Incuse Indian design was the first and only major circulation coin design from the United States Mint struck into the surface of a coin. The Incuse Indian was created in 1908 by Bela Lyon Pratt and featured on just two coins during the 1900s, 1910s, and 1920s as part of the larger Gold Eagle coinage. Right now, ½ oz GSM Silver Incuse Indian Rounds are available to purchase online at Silver.com.

Each of the ½ oz GSM Silver Incuse Indian Rounds in this listing recreates the brilliant design of the Quarter Eagle and Half Eagle circulation gold coins from early 20th century America. The designs are available on these fractional-weight rounds, which are the largest available fractional-weight silver products from Golden State Mint in this design. The rounds ship in protective flips or tubes of 20 rounds.

During the first two decades of the 20th century, the United States undertook a program of revitalization for all of its circulation coinage. The first targets of the program were set by President Theodore Roosevelt in 1905 as he sought to revamp the appearance of gold coins from the United States.

Among the first to enjoy a redesign was the Gold Eagle collection. Different artists contributed to the coins of the Gold Eagle series, with Bela Lyon Pratt developing the Incuse Indian Eagle designs for the Quarter Eagle and Half Eagle coins in this series. These coins had denominations of $2.50 (USD) and $5.00 (USD) respectively.

On the obverse of the ½ oz Silver Incuse Indian Round is the image of a Native American tribal leader. This figure is featured in left-profile relief and wears a full headdress upon his head, with accompanying engravings of “Liberty” and a selection of 15 stars.

The reverse of the ½ oz GSM Silver Incuse Indian Round bears the image of an American bald eagle. This design was created by Pratt based upon a 1907 depiction for the US Gold Eagle $10 coin created by Augustus Saint-Gaudens. While Gaudens’ eagle had only the engraving “E Pluribus Unum,” Pratt’s eagle was accompanied by “E Pluribus Unum” on the left rather than right and had the national motto of “In God We Trust.”

If you have any questions, don’t hesitate to contact Silver.com. Our customer service team is available to you at 888-989-7223, online using our live chat, and via our email address.