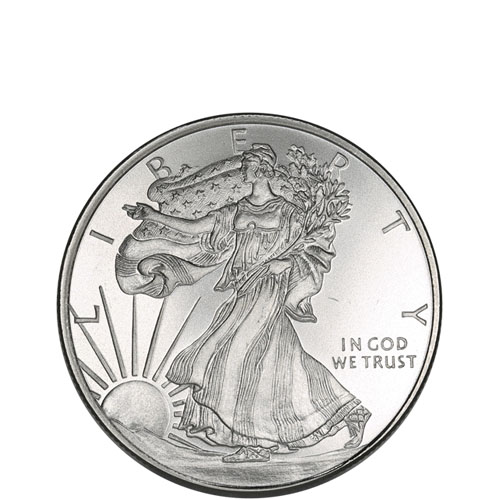 The Walking Liberty Half Dollar coin featured one of the greatest American coin designs in the nation’s history. Struck from 1916 to 1947, the coins depicted Liberty in a design that was symbolic of the nation’s hopes and dreams for its future. Today, that design is found on silver bullion coins and beautiful silver rounds in varying sizes. Right now, you can purchase ½ oz GSM Silver Walking Liberty Rounds online at Silver.com.

Walking Liberty debuted in 1916 at a time when the nation was replacing the imagery found on various denominations of coinage. In 1890, the US Congress had passed an act giving the Director of the Mint and Secretary of the Treasury cause to call for new designs of coinage every 25 years. By 1905, most of the nation’s coin designs were considered outdated by President Theodore Roosevelt and he began to push for new designs at the minimum threshold of 25 years.

1916 marked 25 years since the 1892 introduction of the Barber coinage which consisted of designs for the dime, quarter, and half dollar. Adolph A. Weinman’s Walking Liberty design and Winged Liberty design would replace Barber’s half-dollar and dime coinage designs respectively.

On the obverse of the ½ oz GSM Silver Walking Liberty Round is the image Weinman created for the half dollar. This vision of Liberty depicts her full-length figure as she walks toward the sun on the horizon chasing the brightness of a new day, full of hope and determination.

The reverse of the GSM Silver Walking Liberty Round includes the original half-dollar design from Weinman. It depicts an American bald eagle on a rocky cliff edge with its wings unfolded and its talons clutching a mountain pine sapling.

If you have any questions, please feel free to contact Silver.com. You can reach our customer service team at 888-989-7223, chat with us live online, or via our email address.