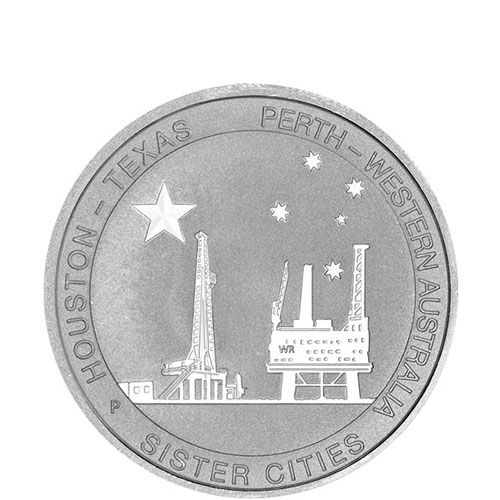 At the Battle of Sunda Strait, the USS Houston and the HMAS Perth were sunk during a joint American-Australian effort to delay Japanese naval advances toward Australia. Though the ships were lost, they accomplished their mission of stalling the Japanese and also helped set the foundation for a Sister City connection between Houston, Texas and Perth, Australia. Today, the ½ oz Silver Texas-Australia Sister Cities Coin is available to you online at Silver.com.

The journey to Sister City connection for these two locations began during World War II, but it was fostered further over time. In 1962 when John Glenn orbited the Earth on his spaceflight, overseen by NASA in Houston, the people of Perth turned on every possible light so Glenn could see their city from his orbit.

In 1984, Houston and Perth solidified their Sister City status. Houston was looking to expand its global ties, and Perth proved an ideal partner from cultural and historical standpoints, as well as economic reasons. Both Houston and Perth have large energy sectors, which lent themselves easily to this 30th anniversary Texas-Australia Sister Cities coin.

All ½ oz Silver Texas-Australia Sister Cities Coins are in BU condition. Known as Brilliant Uncirculated, coins in this condition have no signs of wear and tear. You may, however, notice minor flaws ranging from breaks in the luster and spotted surfaces to contact marks from the production process at the mint.

The obverse of all Texas-Australia Sister Cities Coins features the right-profile portrait of Queen Elizabeth II. Her Majesty features on all commonwealth coinage, and this is the fourth-generation depiction of her since 1952. This particular design came from Ian Rank-Broadley in 1998.

On the reverse of the ½ oz Silver Texas-Australia Sister Cities coin is the image of oil derricks. Both cities have large energy sectors to their economies, and the economic ties between the two was a strong basis for the Sister City connection made in 1984.

All coins were struck by Perth Mint in Australia. The Perth Mint was originally founded in 1899 as the third and final Royal Mint facility of the British. Today it is owned by the state government in Western Australia, and operates independently of the sovereign Royal Australian Mint in the federal capital of Canberra.

Please feel free to reach out to Silver.com with questions when buying silver. You can call us at 888-989-7223, chat with us live online, or simply send us an email.