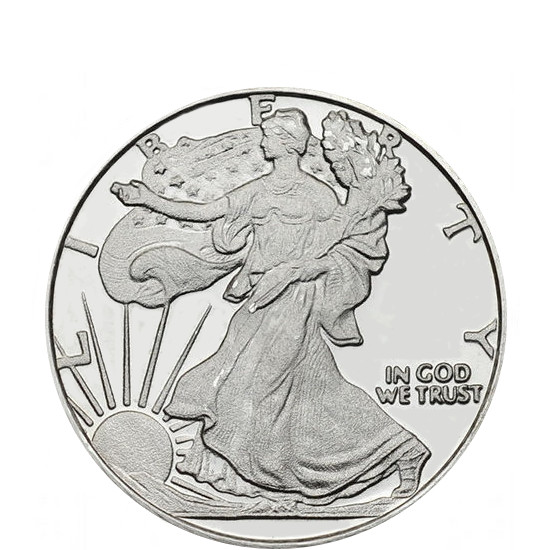 The Walking Liberty coin design is one of the most reproduced in American coining history. First used on an official silver half-dollar coin from the United States Mint, it is currently found on official coins, commemorative issues, silver rounds, and bars from numerous mints. A new 1/10 oz Highland Mint Silver Walking Liberty Round is now available on Silver.com.

Adolph A. Weinman was the sculptor behind the design of Walking Liberty. His image features Lady Liberty draped in the American flag as she walks toward the setting sun in the distance. The imagery he uses is symbolic of America’s desire to seek out a brighter future at all times.

Weinman’s image first appeared on the Walking Liberty Half Dollar coin from 1916 to 1947. Following the end of that coin program, the Walking Liberty image was refined and reintroduced on the obverse side of the nation’s official silver bullion sovereign coin, the American Silver Eagle, in 1986.

On the obverse side of the ½ oz Highland Mint Silver Walking Liberty Round is the image of Liberty. Similar to the original half-dollar coin, she is surrounded by engravings that read “Liberty” and the motto “In God We Trust.”

The reverse side of the round features the same heraldic eagle image found on the American Silver Eagle, with one subtle difference. Above the eagle are 13 stars representing the original colonies, while “United States of America” is featured along the top edge of the design set. Instead of the face value below, the round’s weight, purity, and metal content are engraved, along with the “HM” mint mark.

Highland Mint is a private mint in Melbourne, Florida that was established in the 1980s. Today, it is a full-service facility that offers in-house refining, design, layout, and production capabilities. Most of its best-selling products are collectible precious metals licensed by the NFL, NHL, NBA, and MLB.

If you have questions for a Silver.com associate, there are many ways to reach us. You can call us at 888-989-7223, connect with us online using our live web chat, or send your inquiries to us via email. If you are interested in similar products, check out our full selection of Silver Rounds.