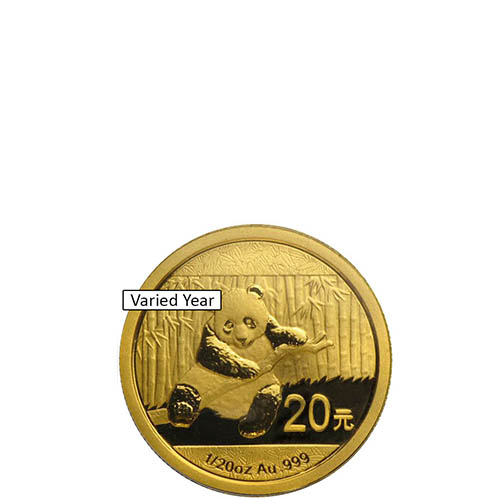 The Chinese Panda coin series from the Chinese Mint debuted in 1982 as the official bullion coins of the People’s Republic of China. Coins in this collection are available in both silver and gold, with the gold bullion option issued first in the series. The 1/20 oz Gold Chinese Panda Coins are currently available to you online for purchase at Silver.com.

China’s official bullion coins have a unique history that starts in 1982 with the first-ever release of the Gold Chinese Panda coins. In that year the Chinese Mint issued the Gold Panda coins with four options to choose from that included a 1 oz, ½ oz, ¼ oz, and 1/10 oz coin. One year later in 1983, the mint expanded the series to feature these 1/20 oz Gold Panda coins.

On the reverse of these 1/20 oz Gold Chinese Panda Coins you’ll find a distinct image of the Giant Panda species. The Chinese Mint has used a different image of the bear species on this side each year since 1982, with only the 2001 and 2002 coins using a repeat design.

The obverse of all Gold Chinese Panda coins depicts the outer façade of one of the primary structures in the Temple of Heaven complex. This building is known as the Hall of Prayer for Abundant Harvests. Chinese Emperors of the Ming and Qing dynasties routinely visited this site in south-central Beijing to pray alongside their people for a good harvest year.

In this Silver.com listing, you are purchasing a 1/20 oz Gold Chinese Panda Coin from varied years which remains sealed inside of its individual plastic packaging from the Chinese Mint. The 1/20 oz coins were struck with this weight marking from their 1983 introduction until 2015. Starting in 2016, the Chinese Mint switched its official weight measurements to Grams instead of Troy ounces.

Silver.com will randomly select the year of issue you receive based on availability in our warehouse when your order is processed for shipping. We encourage you to contact us at 888-989-7223 with any questions. You can also connect with us online through our live chat and email address.