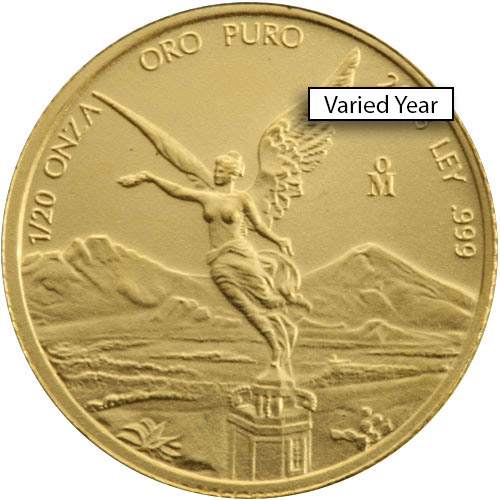 The Mexican Mint’s official gold bullion coin series for the nation is the Gold Libertad. With designs taken from the iconic, historic Centenario coin, these gold specimens have been available regularly since 2002 with production stretching back in the early 1980s. Today, the 1/20 oz Gold Mexican Libertad Coin is available to you online at Silver.com.

The image of Winged Victory found on the Libertad series of silver and gold bullion coins debuted in 1921 on the Centenario coin. Winged Victoria, as she is more frequently referred to, is based upon the ancient Roman religion’s goddess of victory. In 1921, the Mexican government celebrated 100 years of freedom with the release of the Centenario and the construction of a statue in Mexico City with Winged Victory at the top.

Each of the 1/20 oz Gold Mexican Libertad Coins available to you in this listing comes from varied years of issue. While the program first debuted with a one-year release in 1981, it wasn’t until 1991 that more continuous production of the coins occurred. In 1991, the Mexican Mint added to the original collection with a 1/10 oz coin and these 1/20 oz coins.

The 1/20 oz Gold Libertad available to you in this listing has a varied year of issue mark ranging from 1991-1994, 2000, or 2002-present. Silver.com cannot guarantee you a specific year of issue mark with your purchase. Coins are chosen from our available supply in the warehouse as your order is fulfilled for shipment.

On the reverse of all 1/20 oz Gold Mexican Libertad coins is the image of the nation’s coat of arms. The Mexican coat of arms includes a bald eagle locked in battle with a serpent on a cactus branch. This is indicative of the nation’s struggle for freedom from Spain, with Mexico reflected in the eagle and Spain in the tight, constricting nature of the snake.

The Mexican Mint was established by Spanish conquistadors in 1535. Constructed to refine gold and silver for the colonial power, its other initial responsibilities included coining colonial currency for Spanish territories throughout the Western Hemisphere.

Please don’t hesitate to contact Silver.com with questions. You can call us at 888-989-7223, chat with us live online, or email us directly. You can also use our website to find the latest gold spot prices!