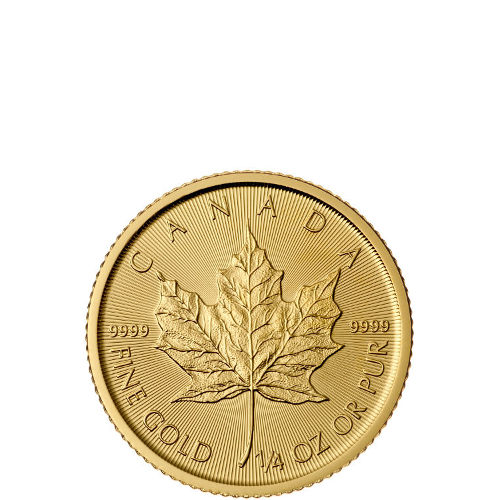 Among the variety of gold bullion coins available for purchase in the precious metals market, the Gold Canadian Maple Leaf stands out. This impressive series of gold coins has been on the market since 1979, surpassed in age only by the Gold Krugerrand coin from the South African Mint. Today, ¼ oz Gold Canadian Maple Leaf coins from varied years are available to you online at Silver.com.

The ¼ oz Gold Canadian Maple Leaf coins in this listing are in BU condition. Coins in this condition have no signs of wear and tear, though you may notice minor flaws ranging from breaks in the luster and spotted surfaces to contact marks from the production process at the mint.

On the reverse of the ¼ oz Gold Canadian Maple Leaf coin you’ll find the sugar maple leaf design that has appeared on the coins since their 1979 introduction. The maple leaf is the national emblem of Canada, appearing on its national flag, and was created for this coin by RCM engravers.

The obverse of all Gold Canadian Maple Leaf Coins features the right-profile portrait of Queen Elizabeth II. From 1979 to 1989, an image of the 39-year-old Queen appeared on the obverse, followed by a 64-year-old depiction from 1990 to 2004. Susanna Blunt designed a new portrait of Her Majesty in 2003 that debuted on the Gold Maple Leaf in 2005 and continues to this day.

Founded in 1908, the Royal Canadian Mint is the official sovereign mint of Canada. The mint consists of its original facility in Ottawa, the federal capital city of the nation, and a newer facility opened in the city of Winnipeg in the 1980s.

Please feel free to reach out to Silver.com with any questions. You can contact our customer service team on the phone at 888-989-7223, or connect with us online through our live web chat and email features.