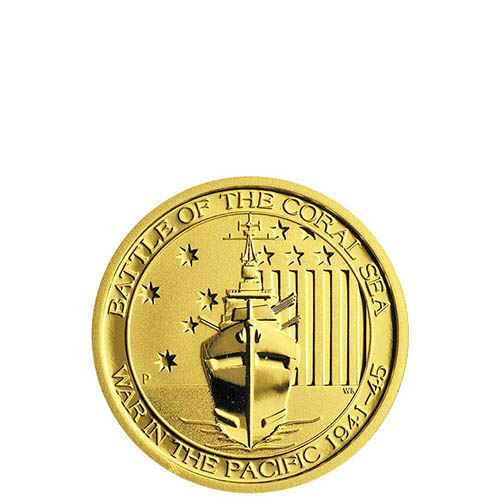 Shortly after the United States was pulled into World War II by the Imperial Japanese Navy’s attack on Pearl Harbor, the forces of the United States Navy fought alongside the nation’s closest ally in the Pacific Theater to defend against an invasion. Right now, 2014 ¼ oz Gold Australian Battle of Coral Sea Coins are available to purchase online at Silver.com.

Each 2014 ¼ oz Gold Battle of the Coral Sea Coin available to you here today is in BU condition. These gold coins were initially offered by the Perth Mint inside of individual plastic, tubes of 20, or boxes of 200 coins. Today, the coins are available to you at Silver.com in individual protective packaging.

After the attack on Pearl Harbor, the United States Navy steamed westward to begin confronting Japanese aggression throughout the Pacific and render aid to its allies. The first major naval engagement for the United States was the Battle of Coral Sea. Two US Navy carrier task forces, together with a joint American-Australian cruiser fleet, clashed with the Imperial Japanese Navy in the Coral Sea waters between New Guinea, Australia, and the Solomon Islands.

On the reverse of the 2014 ¼ oz Gold Battle of the Coral Sea Coin is a design reflective of the joint task force of American and Australian cruisers which forced the Japanese out of the Coral Sea following the battle. The ship sails toward the viewer with the Australian flag in the background on the left, and the American flag in the background on the right.

The obverse of the Gold Australian Battle of the Coral Sea Coin includes the portrait of Queen Elizabeth II. Her Majesty is shown here in a fourth-generation, right-profile design initially created in 1998 by Ian Rank-Broadley for the Royal Mint to use on British coinage.

If you have any questions, please don’t hesitate to ask. Silver.com associates are available to you at 888-989-7223, online using our live chat, and via our email address.