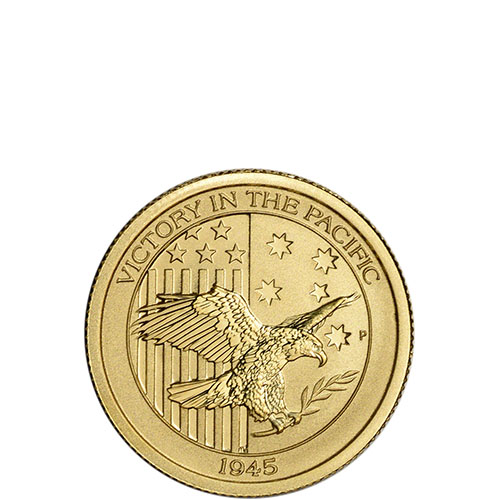 When buying gold online, the product lineup from Perth Mint is hard to beat. The gold bullion coins it strikes each year range from annual-release bullion to commemorative gold marking special occasions or historic moments. The Victory in the Pacific Coins were struck in silver and gold. Right now, ¼ oz Gold Victory in the Pacific Coins are available to purchase online at Silver.com.

Each of the ¼ oz Gold Victory in the Pacific Coins from the Perth Mint is available to you in this listing in BU condition. The coins were struck by Perth in both gold and silver, with options ranging from ¼ oz gold and 1/10 oz gold to ½ oz silver. All coins have the same obverse and reverse designs regardless of metal content or size.

Victory in the Pacific is one of the many names used to mark the day Allied Nations set as a commemorative date for the surrender of Japanese Imperial Forces at the end of World War II. The United Kingdom and Australia celebrate Victory in the Pacific, or V-J Day, on August 15 to mark the date of August 15, 1945, when Japan announced it would surrender. In the United States, V-J Day is celebrated on September 2nd, marking the date of September 2, 1945, when Japanese representative signed the terms of surrender aboard the battleship USS Missouri in Tokyo Bay.

On the reverse side of the ¼ oz Gold Victory in the Pacific Coin is the image of the flags of the United States and Australia. The American flag is referred to as the Stars and Stripes, and its distinctive collection of stars in a corner and stripes are featured in a vertical position on the left side of the design field. The Australian flag is represented here with the Southern Cross star cluster, a constellation of five white stars with one five-pointed star and four seven-pointed stars.

In the center of the reverse design field, you’ll find a symbol of the combined military power and desire for peace of the two nations. A powerful eagle flies through the center of the design but carries in its talons an olive branch of peace.

The obverse of the ¼ oz Gold Victory in the Pacific Coins include the effigy of Queen Elizabeth II. Her Majesty is shown in right-profile relief in a 1998 design created by Ian Rank-Broadley which offers a fourth-generation design in Elizabeth II’s reign.