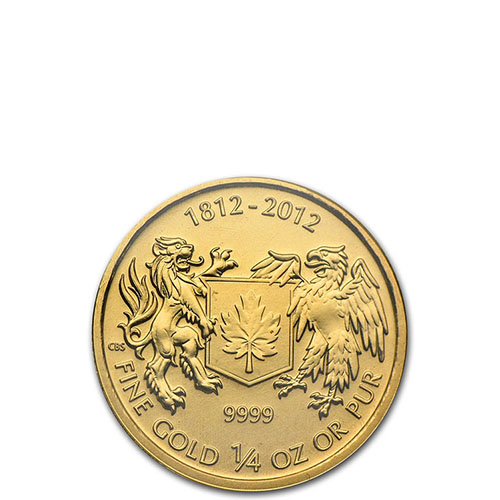 Americans endured nearly a decade of war in search of their independence from Great Britain. Launched in 1775 and formally concluded by 1783, the Revolutionary War saw a group of “peasants and farmers” defeat the greatest military force in the world at the time, unclenching the grip of the British Empire on a large stretch of North America and forming the United States of America. Today, ¼ oz Gold War of 1812 Coins commemorate the next war to ensure independence and are available to you online at Silver.com.

The War of 1812 is generally viewed today by combatant nations as a stalemate. Though Americans concluded the war with the taste of victory on the battlefield, with General Andrew Jackson soundly defeating the attempt of British forces to invade New Orleans two weeks after an armistice had been signed, neither side achieved its goals in the war.

For Britain, the idea of drawing Native American tribes into the conflict was the confine the United States of America to its East Coast enclaves by establishing an Indian state in the northwest while pushing Canada’s borders southward. America wanted to end British impressment on the high seas and even made advancements into Canada in hopes of taking control of Canadian territory.

All of the ¼ oz Gold War of 1812 Coins come from the Royal Canadian Mint, and were struck to commemorate the 200th anniversary of the outset of the war on the North American continent. The gold coins have reverse engravings noting this moment with “1812-2012” featured at the top of the design field.

On the reverse of the ¼ oz Gold War of 1812 Coins are symbols reflecting the combatant nations and groups. The shield in the center features the maple leaf, marking the efforts of French-Canadian nationals and Native American tribes. On the right is the American Eagle, and on the left is the English Lion.

The obverse of all Gold War of 1812 Coins bear the fourth-generation depiction of Queen Elizabeth II. Her Majesty is shown here in a right-profile portrait and was created in 2003 by Susanna Blunt.

Please feel free to reach out to Silver.com with your questions. You can contact us on the phone at 888-989-7223, chat with us live online, or simply send us an email.