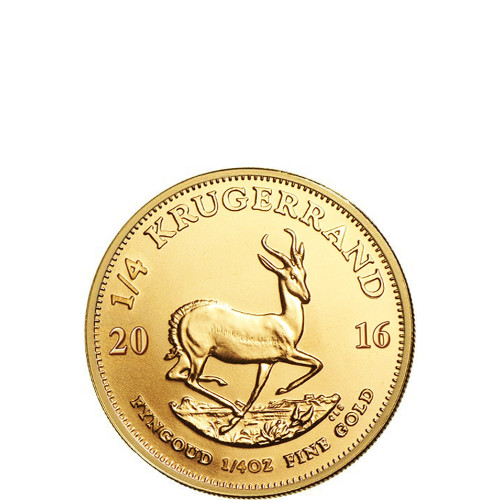 South Africa’s Krugerrand Gold Coin was once the chosen coin by investors around the globe. First introduced in 1967, the original Krugerrand dominated the global gold-coin market for more than two decades. The massive bull market in gold that existed during the 1970s pushed the Krugerrand to the top of investor’s minds. It is believed that 22 million Krugerrands were imported to the US alone between 1974 and 1985. Today, you can purchase the 1/4 oz Gold South African Krugerrand Coins from the year of our choice in brilliant uncirculated condition.

Krugerrands dominated the bullion market of the world despite economic sanctions introduced by Western nations in the 1970s. The goal of the sanctions was to punish South Africa for its system of apartheid, but had little impact on the popularity and spread of the Krugerrand. In 1980, the South African Mint introduced its first fractional Krugerrands. In addition to the 1/4 oz Gold South African Krugerrand, the mint produced 1/2 and 1/10 oz coins.

On the obverse side of the 1/4 oz Gold South African Krugerrand is a left-profile portrait of Paul Kruger, as designed by Otto Schultz in 1984. Kruger was the 5th President of the South African Republic, and is credited with leading the Boer resistance of the British during the Second Boer War. Kruger’s image is surrounded by engravings of “Suid-Afrika” and “South Africa,” the English and Afrikaans-language names for the nation.

The reverse side of the coin features the national emblem of South Africa, a galloping Springbok antelope. The antelope is surrounded by engravings of “Krugerrand,” the weight, metal content, and purity of the coin, as well as the year of minting for the particular coin.

Silver.com wants all its shoppers to feel a sense of ease regarding their purchase. If you have any questions about this 1/4 oz Gold South African Krugerrand or other products before placing your order, don’t hesitate to contact our associates at 888-989-7223. You can also use our live web chat function to get your questions answered.