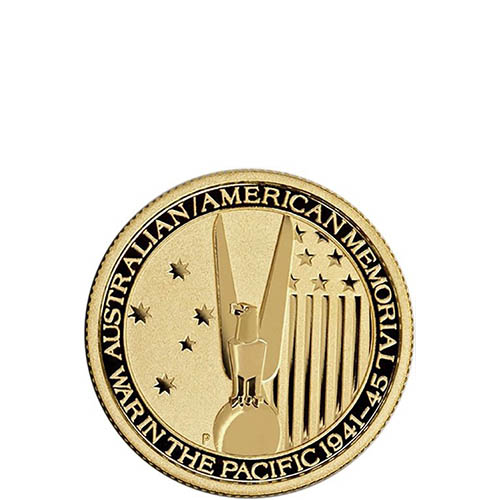 As the Imperial Navy and Imperial Army of the Empire of Japan marched south and east into the islands of the Pacific Ocean, two major nations stood as the only line of defense against Japanese aggression. Allied to the United Kingdom, Australia was involved in World War II from the outset. The American military entered the fray after Japan bombed Pearl Harbor in Hawaii in 1941. These ¼ oz Gold US Australian WWII Coins celebrate the partnership between the two nations and are available to you for purchase online at Silver.com.

The United States of America and the Commonwealth of Australia worked closely during World War II to help protect and defend the Australian homeland from Japanese aggression. At the same time, the navies from both nations coordinated to help retake islands throughout the Pacific invaded by the Imperial Navy as Japan moved south and east from its home islands.

On February 16, 1954, a young Queen Elizabeth II came to Canberra, Australia to unveil a monument to the alliance between the United States and Australia during World War II. The 259-foot tall Australian-American Memorial is a tapered column of steel framework and aluminum sheeting that holds a stylized American eagle at its very top point on a sphere. The memorial commemorates the contributions America made to aiding Australia during the war.

On the obverse of the ¼ oz Gold US Australian WWII Coins is the effigy of Queen Elizabeth II. In this right-profile portrait, you’ll find a fourth-generation vision of Queen Elizabeth around the age of 72. It was designed for the Royal Mint in 1998 by Ian Rank-Broadley.

The Perth Mint is the oldest operating min in Australia, having opened its doors in 1899. Today, the mint is a state-owned entity of the government of Western Australia and operates independently of the Royal Australian Mint.

We encourage Silver.com customers to call us with questions at 888-989-7223. You can also connect with us online through our live chat and email address. Gold prices are also listed on our website for your convenience at all times!