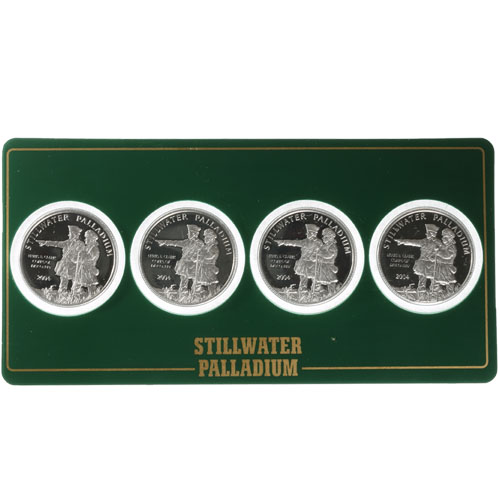 Palladium rounds are not a commonly-issued type of palladium bullion, but there is one set out there that offers all the diversity of a gold or silver bullion coin set. The Lewis & Clark Series of palladium rounds is available with an array of individual sizes and various multi-round sets for investors and collectors to purchase. Right now, 1/4 oz Palladium Johnson Matthey 4-Round Sets are available to purchase online at Silver.com.

Each of the 1/4 oz Palladium Johnson Matthey 4-Round Sets in this product listing is available to you with a green assay card that houses all four individual 1/4 oz palladium coins. The set has a green obverse to the card and a reverse that identifies Stillwater Palladium as the designer and Johnson Matthey as the production facility for the palladium rounds. You will also find the individual weights for each round and total weight of the set on the reverse with the unique serial number for that four-round set.

You will also notice there is an American flag in the upper-right corner that identifies these palladium rounds as having been produced in the United States of America. Johnson Matthey produced the rounds in 2004 at one of its two US facilities using palladium that was mined from the Stillwater Complex in Montana that is owned and operated by Stillwater Mining. These palladium rounds are American made from ground to finished product.

On the obverse side of 1/4 oz Palladium Johnson Matthey 4-Round Sets is the Lewis & Clark design. These two men led an expedition from the Mississippi River west toward the Pacific Northwest to chart and map the lands acquired by President Thomas Jefferson when he purchased the Louisiana Territory from Napoleon Bonaparte’s France. In the design, Lewis stands to gesture toward something on the horizon as Clark looks on.

The reverse face of 1/4 oz Palladium Johnson Matthey Lewis & Clark Rounds includes a recreation of James Earle Fraser’s iconic American bison round from the 1913 Buffalo Nickel. His bust of the powerful buffalo showcases its figure in left-profile relief standing on a small mound of dirt.

If you have any questions, Silver.com customer service is here to help you out. Please feel free to call us at 888-989-7223, chat with us live online, or simply send us an email with your inquiries.