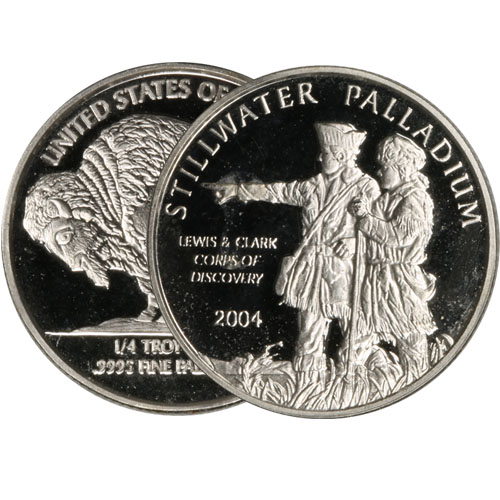 Palladium is enjoy a renaissance in demand as a precious metal investment piece as of the 2010s. With extreme rarity in the Earth’s crust and a growing number of commercial and industrial applications, palladium’s value is rising steadily and investors are seeking out more palladium bullion products. In turn, mints are answering the call with new product lineups. Now, 1/4 oz Palladium is available to you for purchase online at Silver.com in varied conditions and various forms.

Bullion palladium products have been offered by mints around the globe before. Some of the first major programs came from the Soviet Union, including the Palladium Russian Ballerina coins. More recently, the world has seen programs such as the Palladium Canadian Maple Leaf and Palladium American Eagle debut. However, many of these programs have just a 1 oz coin. Remaining Palladium Russian Ballerina coins, last issued in 1995, do have fractional-ounce options though.

The obverse design of 1/4 oz Palladium items in this listing vary by the type of product issued. In the case of Palladium Russian Ballerina coins, the obverse is unique in its depiction of a Russian ballerina in a different pose with each date mark in the series. These coins were available from 1989 when the Soviet Union introduced the coins until 1995 when the Russian Federation halted the program.

On the reverse of each 1/4 oz Palladium product available at Silver.com is a distinctive design from different programs. The design on the reverse of a Palladium Ballerina Coin comes with the symbols of the Soviet Union. Other items will have designs representative of the particular program and mint the product came from.

These 1/4 oz Palladium products are available to you with protective plastic flips, plastic sleeves, or, if available, the original packaging from the mint. The condition of these palladium items can range from brand-new to heavily worn or flawed. All items are chosen at random by Silver.com once your payment has been processed. You may receive palladium coins, rounds, or bars. If you buy more than one, you might get several of the same type, in the same condition, from the same mint.

Silver.com customer service is available to field your questions regarding these palladium products on the phone at 888-989-7223. We are also available online through our web chat and email address features.