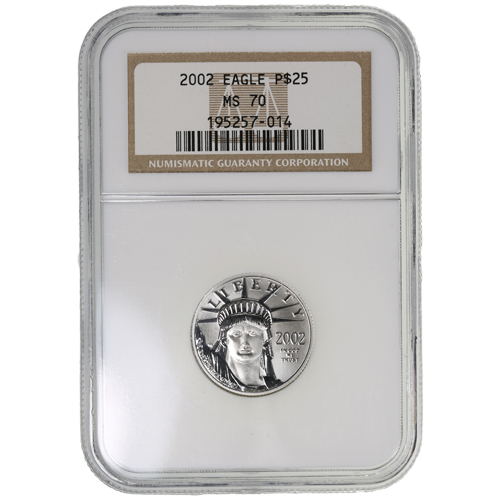 The Platinum American Eagle coin is now available from the US Mint only in a 1 oz weight, but when the coins debuted in 1997 they were available in three fractional-weights as well. Today, many of those remaining fractional-weight coins can be found in certified condition from authorized dealers. The ¼ Platinum American Eagle coin is available to you today in perfect condition online at Silver.com.

Each ¼ oz Platinum American Eagle coin listed here is in perfect condition according to the NGC. Coins with a Mint State 70 grade have full, original mint luster and lack all detracting flaws. The ¼ oz Platinum American Eagles available today are from the issue years of 1997 to 2008, but Silver.com cannot guarantee any particular year of issue. Orders are fulfilled based upon availability at the time of processing.

The Platinum American Eagle bullion and proof coin programs are very different from one another. When the coins debuted in 1997, the same designs were used on both obverse and reverse faces of the coins. Now though, proof Platinum Eagles have different reverse designs every year.

¼ oz Platinum American Eagle Coins were originally available in the bullion versions from 1997 to 2008, at which point the entire program was put on hold. While originally not the most popular of the four weights available, the ¼ oz Platinum American Eagle Coin had the highest mintage of all four weights in bullion in the last year of availability (2008).

We encourage all Silver.com customers to reach out to us with questions at 888-989-7223, or connect with us online through our live web chat and email features.