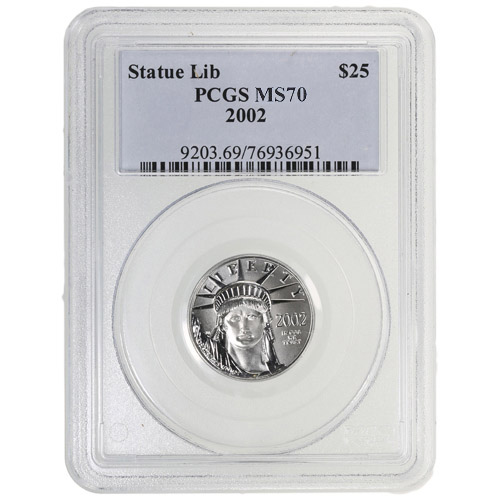 The Platinum American Eagle coin is now available from the US Mint only in a 1 oz weight, but when the coins debuted in 1997 they were available in three fractional-weights, as well. Today, many of those remaining fractional-weight coins can be found in certified condition from authorized dealers. Today, the ¼ oz Platinum American Eagle Coin is available in perfect condition online at Silver.com.

Fractional-weight Platinum American Eagle coins are no longer available in new production from the United States Mint. When the coins debuted in 1997, the bullion and proof versions of the coin were available in a total of four weights. The 1 oz coin was accompanied by the 1/10 oz, ¼ oz, and ½ oz coin.

The ¼ oz Platinum American Eagle coins listed here with JM Bullion have been certified perfect coins by the PCGS. Coins in this condition have full, original mint luster and feature no detracting flaws of any kind.

Please direct your questions to a Silver.com customer service associate at 888-989-7223. You can also connect with us online using our live chat or email features.