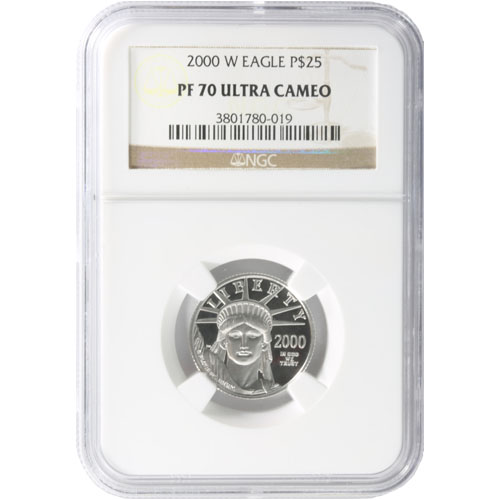 If you want design variation in a United States Mint coin series, the Proof Platinum American Eagle is the coin for you. This series has been in production since 1997 and the US Mint uses fresh designs on the reverse side each year, with the obverse getting fresh designs since 2018. Now, 1/4 oz Proof Platinum American Eagles are available to you for purchase online in perfect condition at Silver.com.

Designs on the reverse of 1/4 oz Proof Platinum Eagles vary by year. Between 1997 and 2008, the US Mint used a different design each year with various artists contributing. Thomas D. Rogers contributed the debut 1997 design of an American eagle flying over the nation, the same design which still features on the reverse of bullion coins. He also contributed designs to the Vistas of Liberty series between 1998 and 2002.

These 1/4 oz Proof Platinum American Eagles are available to you with a PF70 certification. The NGC assigns PF70 grades to coins with full, original mint luster and no detracting flaws of any kind. Ultra-cameo, or UCAM, coins have strong, frosted designs and deeply-mirrored, clear background fields.

We cannot guarantee which coin date and design you receive. This is a random listing and your coins are chosen at random once your payment has been processed. If you buy multiples, we cannot guarantee you will receive differing designs and dates.