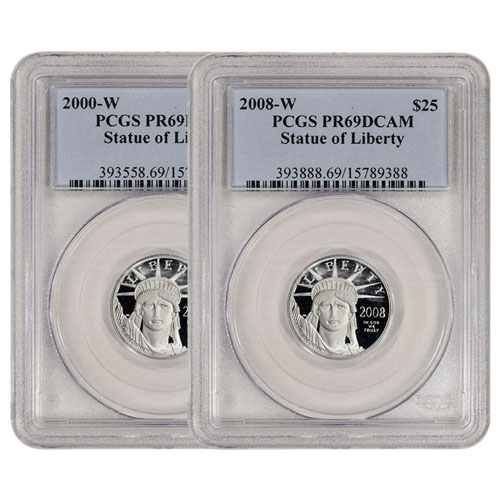 Platinum American Eagles are the only bullion platinum coins from the United States Mint and are also the only bullion products from the mint that feature new designs on one side with each new release. The Proof Platinum Eagles have new designs on the reverse each year, with fractional-ounce coins available in the collection only from 1997 to 2008. Today, 1/4 oz Proof Platinum American Eagles are available to you online at Silver.com in near-perfect condition.

The United States Mint has produced the Proof Platinum American Eagle coin in every year since 1997. This is stands in opposition to the bullion coin that was halted after 2008, resumed in 2014, not struck in 2015, and has been issued again since 2016. The Proof Platinum Eagles have been available in 1 oz platinum since 1997, but the fractional-ounce coins were only produced from 1997 to 2008.

All 1/4 oz Proof Platinum American Eagles in this listing are available with PR69 certifications. Considered near-perfect specimens, these coins showcase full, original mint luster with a maximum of two minor detracting flaws. Acceptable flaws at this grade level include only minuscule contact marks or hairlines.

A deep-cameo coin, or DCAM, is one with beautiful visual appeal. DCAM stands for coins with a deeply-mirrored, clear background field and a strong, frosted design element. This is noted in the “DCAM” inscriptions on the label in the slab. This is a random year listing, which means you could receive several coins with the same design and date mark if you buy multiples. We cannot guarantee the date and design on individual orders either.