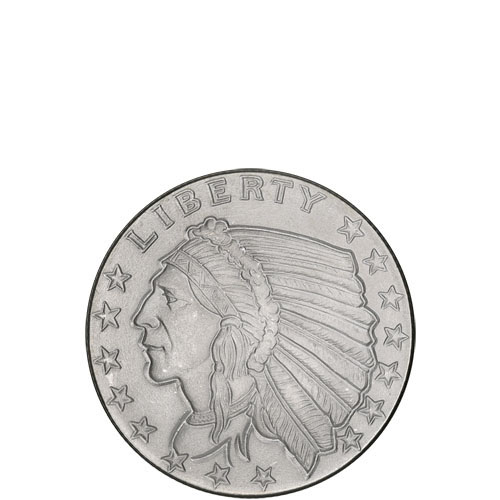 At the turn of the 20th century, US President Theodore Roosevelt believed the nation’s coinage was not reflective of its growing status. The designs were outdated and, in some cases, ugly in the mind of President Roosevelt. In 1905, he approached Augustus Saint-Gaudens to redesign the $10 Gold Eagle and $20 Gold Double Eagle coinage.

It would fall to Bela Lyon Pratt to design artwork for the other Gold Eagle coins following the death of Saint-Gaudens in 1907, who had been tasked with redesigning all gold coins. Pratt developed the Incuse Indian design in 1908 that would go into use on the Quarter Eagle ($2.50) and Half Eagle ($5.00) coins.

All of the ¼ oz GSM Silver Incuse Indian Rounds listed here bring the original Incuse Indian design back to life on fractional-weight silver rounds courtesy of the Golden State Mint. Each individual round is housed within a protective flip, while multiples of 20 are available to you inside of tubes.

On the obverse side of the GSM Silver Incuse Indian Round, you’ll find the image of a Native American tribal leader in left-profile relief. The design captures the figure wearing a full headdress with the word “Liberty” engraved above his head and 15 stars surrounding his bust.

The reverse of the ¼ oz Silver Incuse Indian Rounds features an American bald eagle. This design includes an eagle at rest on a perch of arrows with an olive branch wrapped around the arrows. Engravings include “Golden State Mint,” “E Pluribus Unum,” “In God We Trust,” and the weight, purity, and metal content of the round.

Please feel free to reach out to Silver.com if you have any questions about buying silver. You can contact us on the phone at 888-989-7223, chat with us live online, or send us an email with your questions.