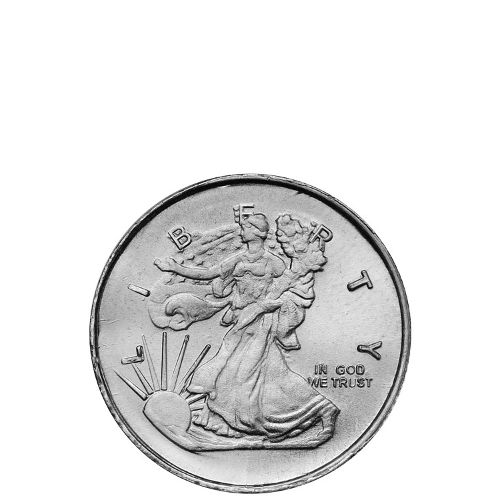 There are multiple versions of the reverse side of this coin, please be advised that you may receive any combination of designs with your order.

These one quarter ounce .999 fine silver Walking Liberty Rounds are produced by the Highland Mint. They feature a design commemorating the Walking Liberty series of coins featured on US quarters and half dollars in the beginning of the 20th century. While the original coins only contained 90% silver, these commemorative rounds are slightly purer at 99.9%.

Lady Liberty is a favorite and much featured character in America’s coinage, and her image is portrayed in a variety of poses. Both sides of the original Walking Liberty Half-Dollar were designed by sculptor Adolph A. Weinman. Elsie Stevens was his privileged model for the Walking Liberty image as well as the Mercury dime.

The lovely scene in which Lady Liberty is depicted on the obverse side of this coin was influenced by French coins designed by Oscar Roty, in which Lady Liberty is depicted as the sower of seeds of liberty. For the reverse side of the piece, Weinman adapted an image that he created for a medal for the American Institute of Architects. The laurel on the medal was replaced by a pine sapling. The majestic eagle depicted in Weinman’s medal is highly lauded for its powerful and stately presence.

Silver.com customers receive free shipping for orders over $3,000 and industry leading shipping rates apply to smaller purchases. Orders will be sent via USPS or UPS within about three days of confirmed purchase and delivered directly to your home or office. Each order is traceable and insured against loss while on its way to you.

If you have questions about these Walking Liberty Medallion Rounds produced by the Highland Mint or anything else you can contact us at 888-989-7223. You can also get in touch with one of our representatives through email or live chat.

Dimensions are not the same as other 1/4 oz Walking Liberty Rounds from other brands. These coins tend to be smaller and thicker.