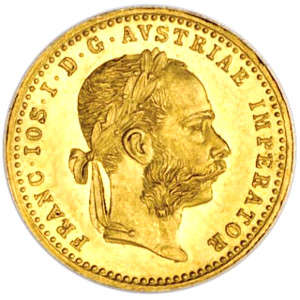 The Gold Ducat is a former circulation coin on the European continent which was used as the basis for various currency programs in differing kingdoms, empires, and city-states. The first coinage using the term “ducat” was issued by Sicily in 1140, and throughout the Middle Ages, various forms of the coin were issued by other countries. Today, 1 Ducat Gold Austrian-Dutch Coins are available to you online at Silver.com.

Gold Ducats were struck in various nations and replicated by various other nations. Austrian-Dutch gold ducats are so-named because the Austro-Hungarian Empire in the late 19th century adopted the popular Dutch ducat format for its own trade currency. The Austrian Mint struck those Ducats, as did the Royal Dutch Mint for centuries.

All of the 1 Ducat Gold Austrian-Dutch Coins in this listing are restrikes available from the Austrian Mint. The Austrian Mint ceased regular production of Ducats in World War I, but did begin issuing restrikes in 1915 and continued to do so throughout the 20th century. The Royal Dutch Mint also has a history of issuing modern restrikes of original 1 Ducat Gold designs.

These 1 Ducat Gold Austrian-Dutch Coins are available to you from varied years of issue during the restrike period. Each coin is in either BU or AU condition, the latter of which is known as About Uncirculated and indicates the presence of slight signs of wear and tear.

On the obverse of 1 Ducat Gold Austrian-Dutch Coins, the Austrian Mint used a young effigy of Franz Joseph I for its restrike coinage. The right-profile portrait features Franz Joseph I’s trademark mustache and sideburns facial hair and a wreath crown atop his head, which is a symbol of military prowess that dates back to the Roman Empire.

The reverse side of 1 Ducat Gold Coins features the Austro-Hungarian Empire’s coat of arms. This seal includes a double-headed eagle and a heraldic shield and was also the coat of arms of the Hapsburg Dynasty. The Hapsburg Dynasty ruled various empires on the European continent, with Franz Joseph I leading the Austro-Hungarian Empire and serving as the last reigning monarch of the dynasty.

Please feel free to reach out to Silver.com with your questions when buying gold. You can contact us online through our live chat and email address, or simply call us on the phone at 888-989-7223.