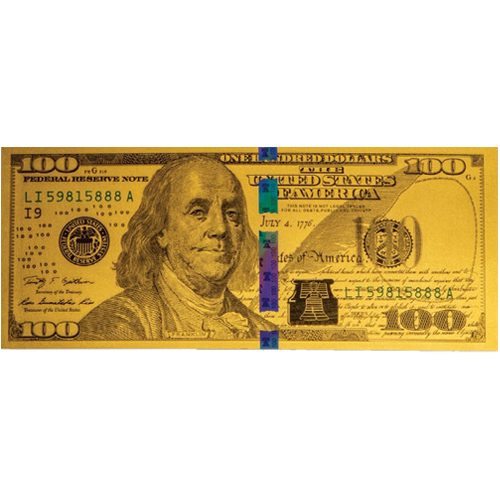 First introduced in 1862, the $100 denomination of the United States Dollar is one of the most popular denominations within the fiat currency of the United States. Federal Reserve data from 2017 notes that the number of $100 bills in circulation is actually greater than the number of $1 bills in circulation. Today, 1 Gram Gold $100 Benjamin Franklin Replicate Notes are available to you online at Silver.com.

As of 2012, it was estimated that $100 bills represented 77% of all paper currency in circulation in the United States. While the $100 bill is the most prevalent among US notes in circulation, a 2018 research paper from the Federal Reserve Bank of Chicago noted that as much as 80% of those notes were in circulation or otherwise held in other countries around the world.

All of these 1 Gram Gold $100 Benjamin Franklin Replica Notes are available to you brand new from the mint. The gold notes are packaged inside of archival currency sleeves to ensure long-term, brand-new condition for the notes. Each one contains thin layers of gold bullion that make for an affordable, flexible form of gold to add to your portfolio.

On the obverse of Gold $100 Benjamin Franklin Replica Notes is an image of Benjamin Franklin. The bust of Franklin featured on the obverse of the modern $100 bill from the Federal Reserve features a three-quarter profile based on a portrait of Franklin painted by Joseph Duplessis. The portrait depicts a seated figure and was made in 1778. Franklin has appeared on the $100 bill since 1914 when the modern $100 Federal Reserve Note was issued and was most recently modernized in 2009. The design element also includes the words of the Declaration of Independence in the lower-right field, with a quill pen and ink well, the method of writing used during Franklin’s lifetime.

The reverse face of 1 Gram Gold Benjamin Franklin Replica Notes comes with a depiction of Independence Hall. In the modern era, the $100 bill is the only denomination of US currency with a design of a building that is not located in Washington D.C. While Franklin appeared on the $100 bill starting in 1914 when it debuted, Independence Hall has been on the reverse of the note since 1928.

Please don’t hesitate to contact Silver.com if you have any questions. Our customer service team is available to you on the phone at 888-989-7223, on the web using our live chat, and via our email address.