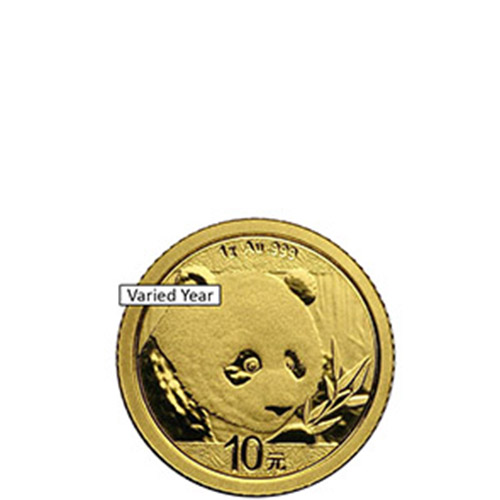 Gold Panda coins from the Chinese Mint represent the official gold bullion coins of the People’s Republic of China. Authorized and backed by the People’s Bank of China, the coins represent the nation with iconic images of Chinese history that include the Giant Panda and the Temple of Heaven. Today, 1 Gram Gold Chinese Panda Coins are available to you online at Silver.com.

When the People’s Republic of China opened its doors to the outside world in 1976, it was only a matter of time before the country produced a major bullion coin series for private investors. Deng Xiaoping took over the nation following the death of Mao Zedong and within six years the nation released just the third-ever gold bullion coin for investors.

Gold Chinese Panda coins debuted from the Chinese Mint in 1982 in a 1 oz gold, ½ oz, ¼ oz, and 1/10 oz option. The following year the Chinese Mint released the coins with a 1/20 oz option as well. As of 2016, the Chinese Mint struck the 1/20 oz coin as a 1 Gram coin instead, shifting the nation’s bullion coin to the metric system for weights and measurements.

All 1 Gram Gold Chinese Panda Coins available here today from Silver.com come from varied years of issue. The coins feature date marks starting with the 2016 issue and run through the present day. All coins are guaranteed by Silver.com to arrive inside of their original plastic packaging from the Chinese Mint.

The reverse side of the 1 Gram Gold Chinese Panda Coin features the image of a Giant Panda. The bear species is found on the reverse of all Gold Panda coins in a new depiction released by the Chinese Mint each year.

Please feel free to reach out to Silver.com if you have any questions. You can connect with our team on the phone at 888-989-7223, chat with us live online, or email us directly with your inquiries.