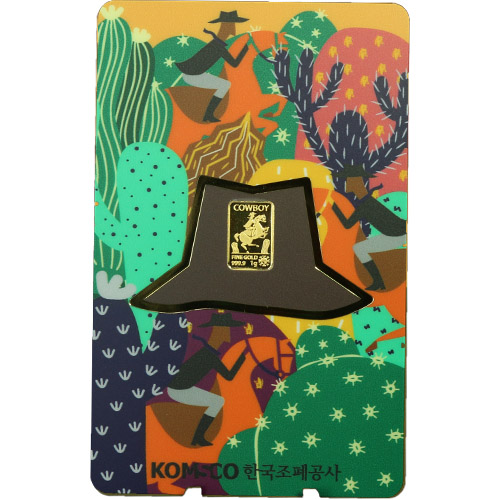 American cowboys are a symbol of the United States of America and its history taming the Wild West. Cowboys were anyone from ranchers and farmers to gunslingers and rodeo performers. KOMSCO focuses on the American Cowboy in a new design for gold bullion bars. The 1 Gram Gold South Korean Cowboy Bar is now available to you for purchase online at Silver.com.

The tradition of American cowboys actually dates back to early European settlers coming to the New World. This was particularly true of Spanish settlers who had a history of working as ranchers and farmers on in the Iberian Peninsula in a manner that was later adapted for use in the western United States by American cowboys.

Use of the term cowboy is pretty broad throughout American history. While it is commonly associated with farm and ranch workers, it is also applied to any individual that could wrangle cattle or handle a gun as a gunslinger. Although there isn’t always a term for these individuals, cowboys exist in nations such as Australia and various countries from South America.

On the obverse of 1 Gram Gold South Korean Cowboy Bars is the image of an American Cowboy on horseback. The horse rears up on its hind legs as the rider leans forward toward the horse’s head to maintain his stability. There are two cacti in the background field. The Taegeuk symbol from the South Korean national flag is also featured on this side of the bars.

The reverse of Gold South Korean Cowboy Bars features the letters of the Korean alphabet, the Hangul, that read the Republic of Korea. At the bottom of the design field has the logo for KOMSCO. In the center, there are four latent security images that appear at different times depending on your viewing angle. You will see two images from Korean culture, “Au,” and “9999.”

These 1 Gram Gold South Korean Cowboy Bars are available to you in brand-new condition at Silver.com. The bars are individually housed inside of sealed assay cards and come with certificate information on the reverse side. Both the obverse and reverse sides of the assay card have stylized cowboy artwork similar to the obverse bar designs.

We encourage Silver.com customers to call us with questions at 888-989-7223. You can also chat with us live online or send us an email with your inquiries.